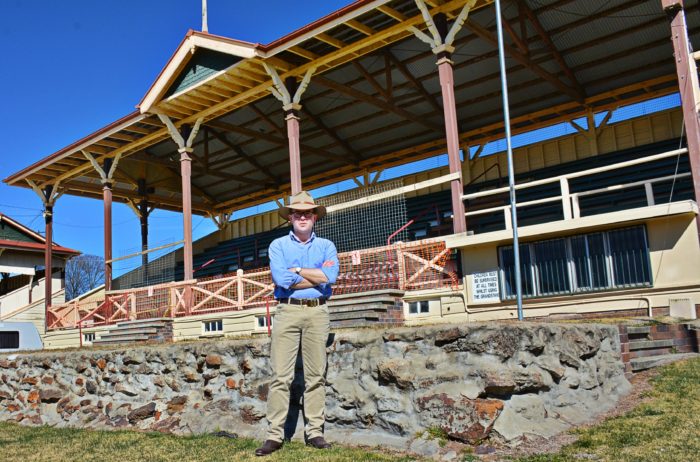 MEMBER for Northern Tablelands Adam Marshall has kicked off a campaign to restore the iconic – and currently condemned – Armidale Showground grandstands to their former glory.

Mr Marshall said funding was desperately needed to repair structural damage to the two grandstands, which had fallen into disrepair over the last decade. He hopes to restoring the form and function of the heritage listed structures and return them as the jewel in the crown of the showground precinct.

“Severe water damage over many years has rendered both grandstands unusable and remediation works are urgently needed to halt the rot that is attacking the foundations of the century old facilities and save them,” Mr Marshall said.

“As well being an important historical buildings for the showground and Armidale, the seating in the grandstands is essential for the Armidale Show and other equine and community events the showground can host.

“At the request of the Showground Trust, I am seeking funding from the NSW Government to ensure the grandstands do not further deteriorate and can be quickly restored to their former glory and be used by the public.”

Mr Marshall said while much of the damage was hidden, the building assessments showed the grandstands could be saved.

“Over the years, water has run down the back of the building, seeping into the foundations and rotting the internal wooden supports,” Mr Marshall said.

“As one of the few remaining examples of twin heritage grandstands in the region – it should be a priority to save them for future generations. They don’t build them like this anymore and Glen Innes’ beautiful single grandstand highlights the value of keeping this seating in its current form.”

“Up until this year at the show, they were fully utilised – normally at show time they’re pretty full,” Mrs Dangar said.

“We were able to get by at show time with moveable portable grandstands, but at major events with lots of people, they won’t do the job.

“Fixing the old grandstands means we can actually allow people to sit in the grandstands and watch what’s going on,” Mrs Dangar said.

The two grandstands are more than 100 years old and the cost of restoring them has been estimated at around $500,000.