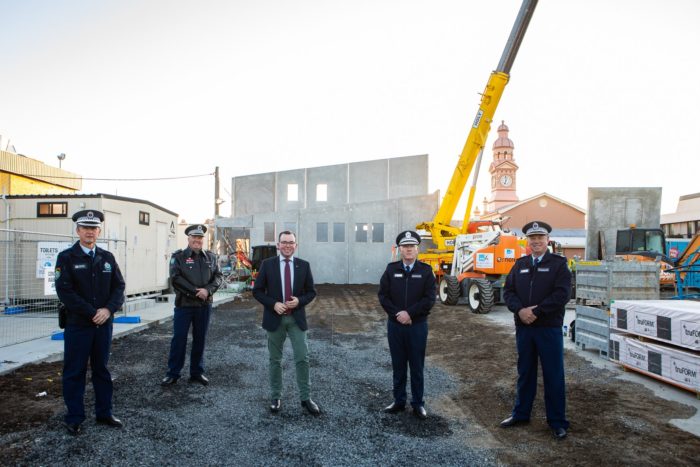 NORTHERN Tablelands MP Adam Marshall has today used a site inspection of the Inverell Police Station development with NSW Police Commissioner Mick Fuller to push for a full complement of officers, once the $16 million police precinct is complete, and the placement of a police dog unit in the region.

Mr Marshall said it was important the Commissioner saw first-hand the scope of the state-of-the-art facility and heard exactly what services and equipment officers would need to keep the Inverell and district community safe into the future.

“Once finished, this 24-hour police station will be a key policing outpost for northern NSW, vital in tackling crime locally and up to the Queensland border,” Mr Marshall said.

“When we started on the journey to secure funding for a new station it was always with the intention of bringing all Inverell’s policing assets under one roof and supporting a growing local police force.

“The new building is large enough to comfortably cater for more than 60 local officers, and I want to start the discussion now about how we work towards filling every one of those positions, so the building is utilised to its full potential.

“I thank Commissioner Fuller for making time in his busy schedule to come out here and see for himself the great work being done by our men and women in blue and to hear directly from them as to what equipment and technology they need to perform their roles.

“I look forward to working with the Commissioner and Police Minister to ensure Inverell’s police have exactly what they need to protect the community.”

Mr Marshall renewed his call for a NSW Police Dog Unit to be based out of Inverell, as a matter of some urgency.

“In 2018, when the designs were being drawn up for the new Inverell Police Station I expressly asked for provisions to be made for a Police Dog Unit, which would support officers across this region,” he said.

“The New England Police District has never had a dedicated dog unit based here and it’s about time we had one to boost policing in the region and the capability of our men and women in blue to keep the community safe.

“I believe the addition of a police dog at Inverell would be invaluable in acting as a deterrent for crimes like theft and break-and-enter, while also aiding police with searching for missing people and reducing drug and firearm related crimes.

“My discussions with the Commissioner have been incredibly positive and, like a dog at a bone, I am not going to let this one go until we have achieved that result.”

Commissioner Fuller said it was wonderful to be back in the region and discuss the creation of a new dog unit position with Mr Marshall.

“I’ve been in discussions with Adam regarding the creation of a new dog unit position for New England and we’ll continue to work towards that outcome with Western Region Commander Assistant Commissioner Geoff McKechnie,” Commissioner Fuller said.

“It’s great to be back in the New England Police District and tremendous to see the progress with the construction of the new Inverell Police Station. It’s a first-class facility which will provide the district’s officers with an operational base as impressive as any in the state.

“More importantly it provides an incredible asset for this fantastic Inverell community and ensures that the NSW Police Force will have a stronger presence than ever in this great town.

“I know that locals will be proud of their police station and will continue to work with us to prevent and disrupt crime.”