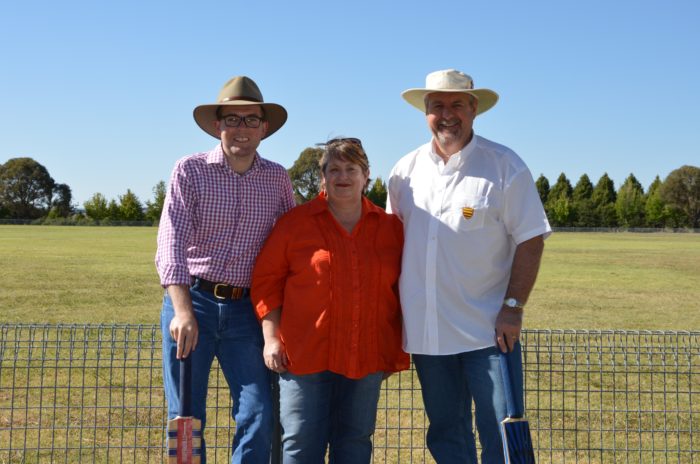 AFTER a rather lengthy off season, cricketing enthusiast and Member for Northern Tablelands Adam Marshall will don his whites on Sunday and lead a team on to the Uralla cricket ground to do battle with Mayor Mick Pearce’s XI.

Mr Marshall said he always jumped at any opportunity to take to the pitch so was more than happy to accept the invitation to play at the charity cricket match organised by the Uralla Cricket Club.

“Local cricket administrator Leigh Kelly struggles each week to field a team from Uralla in the Walcha senior competition so she is hoping this event will revitalise the community’s interest in cricket,” Mr Marshall said.

“The two teams playing on Sunday comprise of past and players so it should be a lot of fun. Hopefully those players that come out of retirement for the day might consider playing on a more regular basis for the Uralla Cricket Club.

“I’ve been honored with the captaincy of one of the teams and fortunately I’ve been assured that a vice captain will be appointed who is familiar with the local talent and can help sort out the field.”

Mr Marshall said theT20 match was also a fund raiser for the club and the McGrath Foundation and encouraged the community to support the event which begins at 12pm on Sunday, 21 February.

“I’d like to think the Marshall XI will bat and bowl their way to a victory but I’m sure Mayor Mick Pearce has a different view as to how the day should proceed,” he said.

Uralla Cricket Club president Leigh Kelly said the club was delighted to have the member and the mayor captaining the teams and was hoping the community would turn up in their droves to support the event.

“Mayor Pearce has done some fancy recruiting to be competitive for the match and Mr Marshall has recently attended the Australia vs India series in Sydney and was seen receiving batting tips from Steve Smith so he is totally set to execute his new skills on the field in his favorite sport,” Mrs Kelly said.

“On the day the club will be holding a barbeque and having a raffle so come along and support your local club.”