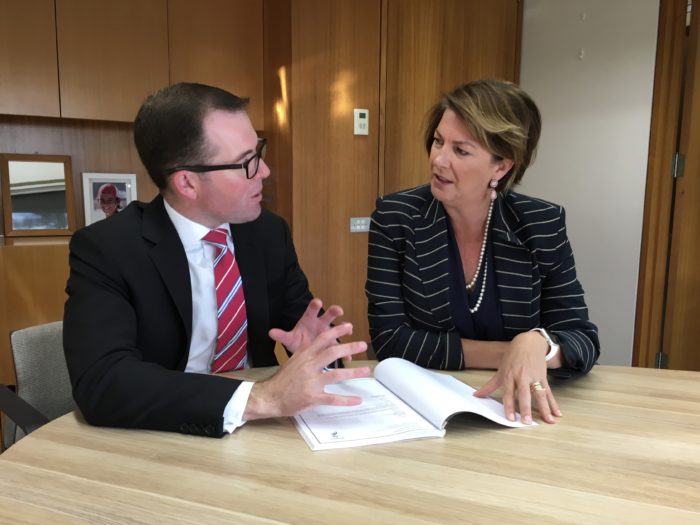 Mr Marshall put the case for approximately half the funding required for the project – $2.8 million – from the State Government, following a visit last year by the Minister’s predecessor Duncan Gay, who was very supportive.

“It was a very positive meeting this morning,” Mr Marshall said. “The new Minister was impressed by the project and equally concerned by the difficulty experienced by heavy vehicles trying to access the Gwydir Highway via Warialda.”

The proposed bypass will resolve the road freight pinch-point at the intersection of Stephen Street in Warialda and the Gwydir Highway.

“It’s a very dangerous intersection for all road users and council and the community is very worried about the likelihood of a serious accident, not to mention the inconvenience and inefficiency of this route, which is technically not rated for B-double access.”

The 3.6 kilometre bypass will take heavy vehicles from the north of Warialda along a new route to the east of the township, over a new bridge on Warialda Creek and onto the Gwydir Highway. A new truck was and effluent dump point will also be construction at the bypass, near the highway.

“This bypass will reduce the travel time for A-double and B-triple road trains travelling from the north of Gwydir Shire, shortening the legal access route onto the Gwydir Highway by 144 kilometres each trip,” Mr Marshall said.

“Currently, the only legal access for these vehicles is via Moree.

“It’ll also remove heavy vehicles from the Warialda CBD and eliminate stock effluent spillage in the middle of town.

“This is a wonderful project which will be a huge win/win for producers and the freight industry but also residents of Warialda who won’t see the heavy vehicles rattling through town anymore.”

Mr Marshall said Gwydir Shire Council had done a magnificent job on the application and put up a very good argument to the Minister as to why he should fund the bypass.

Council will contribute $500,000 and industry is also making a financial contribution.

“Mark Coulton (Federal Parkes MP) and I will continue to lobby our respective governments for the required funds to make this bypass happen,” Mr Marshall said.

“I commend Gwydir Shire Council on this excellent initiative which we both fully support.”