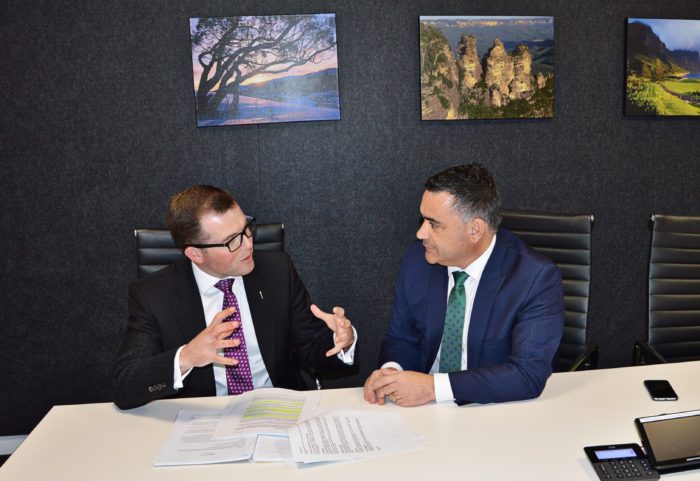 Case put to state government for 60 new jobs based here

MEMBER for Northern Tablelands Adam Marshall has put Armidale forward as the ideal location for the new TAFE NSW Digital Education Headquarters, following the announcement of sweeping reforms to the state’s TAFE structure this morning by the NSW Government.

Last month on the floor of Parliament, Mr Marshall called on the state government to consider the great advantages of locating more of the state’s public service in Armidale, saying that the government needed to demonstrate a commitment to “regionalisation”, not just talk about it.

“State Government does not need to always be run from Sydney,” Mr Marshall told Parliament. “The public service can be managed just as well, if not better and more cheaply, from a regional centre.”

Mr Marshall said establishing the TAFE NSW Digital Education Headquarters in Armidale made sense given the city’s status as the only mainland Centre with full NBN fiber connections to every premises and its strong reputation as an education hub in country NSW.

“I was in Sydney last week talking to the Deputy Premier Troy Grant and Regional Development Minister John Barilaro about the opportunities Armidale offered for state government agencies and services – opportunities just like this one,” he said.

“I’ve already been in contact with the Minister’s office this morning and that of the Aciting Premier, to submit Armidale as the location and put the case.”

Mr Marshall understands the brand new government agency will employ close to 60 people and will have responsibility for developing and delivering all of TAFE NSW digital learning programs and courses.

He said that if secured, it would be a huge boon for the city and the Northern Tablelands.

“The advantages to this region would be massive,” Mr Marshall said “When we bring more people into a city like Armidale, there is an immediate effect on growth and investment.

“If we’re able to pull this off, it will neatly compliment the work federally by Barnaby Joyce to secure the APVMA for Armidale and the 175 jobs that will follow,” he said.

Mr Marshall believed the case for Armidale to house the headquarters was strong.

“Firstly, Armidale is the only Australian city of any size to be completely linked to the world by fibre,” he said. “Every business, every house, is wired into the NBN’s world-class fibre network, so that anywhere in this small city you can access broadband data at speeds better than found through most of our capital cities.

“We also link to the world through two airlines that make 16 flights a day, with a third to start running daily flights to Brisbane in August.

“Armidale is a wonderfully family-friendly city. Most regional centres have space and sporting facilities, but Armidale also boasts the whole gamut of schools – public, private, Catholic and alternative – a renowned university, and a situation that provides its residents access to some of Australia’s greatest wilderness, including several World Heritage Areas.”

Mr Marshall said that in making his submission today, he’d asked the Acting Premier and responsible Minister to do some smart, strategic thinking about where it locates this new agency.

“I think that, as with the AVPMA move, there is a chance here to relocate government departments in ways that create clusters of effort,” he said.

“In regional cities, with their small communities and ease of movement, we can built better synergies between delivery of services or provision of online and digital services.

“With all this in mind, I am appealing to the government to give serious consideration to making Armidale the home of the TAFE NSW Digital Education Headquarters.”