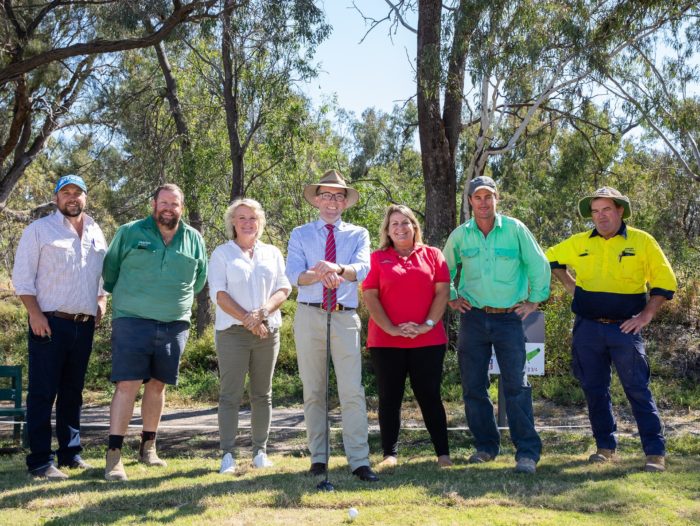 A NUMBER of sporting clubs in Mungindi will charge into the winter season with high-quality new playing equipment, with Northern Tablelands MP Adam Marshall today announcing a $1,899 State Government grant for Mungindi Golf Club and $4,424 for Mungindi Junior Rugby League and Netball Clubs.

Mr Marshall said sport has played an important role in bringing the Mungindi community together after a number of difficult years.

“Mungindi Golf Club is an important community facility which offers one of the only opportunities for adult sport in a 120 kilometre radius,” Mr Marshall said.

“Over the last 20 years, vandalism and flooding has caused significant damage to the the sand green cups, poles and flags making them unsafe and no longer serviceable.

“This funding will allow the club to replace the items on each of the holes, assisting to promote the quality of Mungindi Golf Club and ensuring the facility meets the standard of Golf NSW.

“This grant has come at an opportune time, as Mungindi is gearing up to host the North West District Golf Association Sand Green Championships next month.

“I had the opportunity to take a swing on the course recently and I can say the club’s volunteers have done a fantastic job preparing the greens and fairways for the event.”

Mungindi Golf Club President Scott Warby said Mungindi had experienced significant hardship over the past three years, with the drought and main street fire, and this investment in the community was welcome.

“The grant funding will not only replace the existing cups and flags but also enable the club to facilitate extra competitions, including the newly formed Mid-Week Ladies Competition,” Mr Warby said.

“We hope improvements to the course will encourage more people to play and assist with local’s social and physical wellbeing. It’s important we all have a fun and healthy recreational activity to engage with during these uncertain times.

“This project is not only an investment in a valuable community sporting club; it is investing in the community of Mungindi.”

“Mungindi’s junior netball and rugby league players will be ready to fire up when they run out to play this winter, with the club purchasing new training equipment including balls and cones,” Mr Marshall said.

“I congratulate President Matt Luhrs on the work of he and his committee have done to provide an outlet for local kids to be active and participate in sport, despite their isolation.”