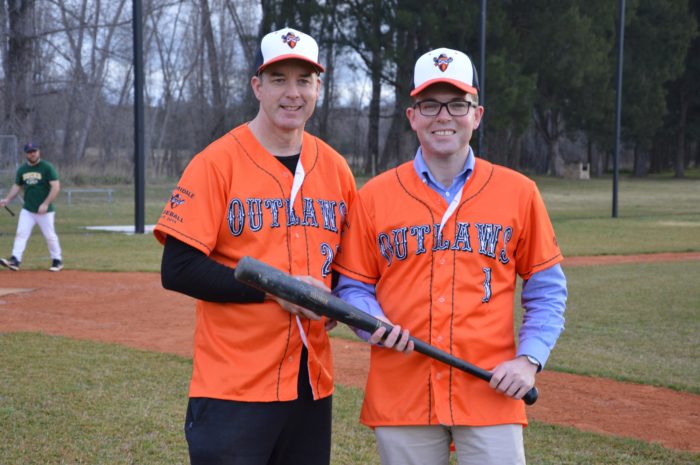 WITH the help of a $14,580 State Government grant, Armidale’s newly-formed baseball club, the Armidale Outlaws, has been able to step up the development of their new home ground.

NSW Regional Development Minister John Barilaro approved the funding after being lobbied by local MP Adam Marshall with a request for assistance.

The grant has gone towards the installation of a back net on the club’s playing field on one of the University of New England’s sports ovals.

Mr Marshall attended a training session last week with the team members to deliver the good news and get a short lesson on how to swing a baseball bat.

“Mick Alldis (Outlaws’ President) first approached me last year with his plans to re-establish baseball in Armidale and I’d like to commend him on his professional approach to gaining community support and sponsorship,” Mr Marshall said.

“It’s very exciting to have baseball back in Armidale and it’s a pleasure to be able to support the development of this club and playing facilities.

“It’s always a difficult process establishing any sports club from grass roots up and therefore very important to get this sort of financial assistance and support from the state government.

“It’s been a pleasure to watch the club’s early progress. The A grade team is sitting on top of the competition and the two B grade teams are doing really well – I’m particularly pleased they are beating Tamworth.”

Mr Alldis said he was very grateful for all the support the club had received since its inception and particularly grateful for Mr Marshall’s advocacy of their behalf to the state government.

“We created a sponsorship program of co-ownership and to date we have more owners than players. That’s a great indication of the interest there is in the community for this sport,” Mr Alldis said.

“Our three teams are doing very well in their first year of competition. We have a great ground now and we’ve been told it rivals any facility in the state. This grant has covered the cost of the back net and our next plan is to build the dugout.”