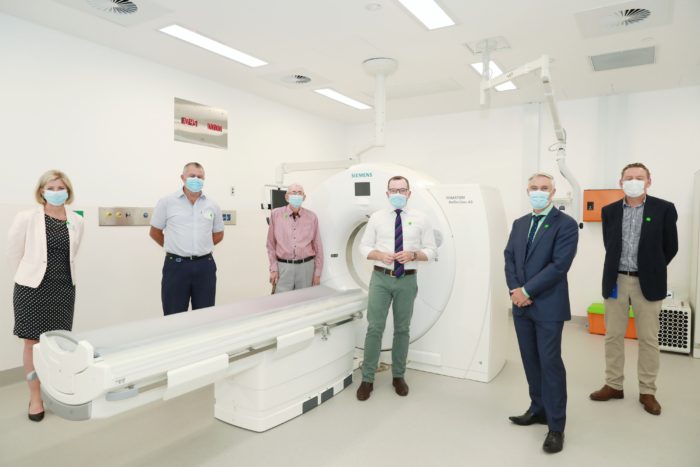 FOR the first time the Inverell community will have access to Computed Tomography (CT) services at its hospital, with Northern Tablelands MP Adam Marshall today officially opening the $1.3 million unit, included as part of the $60 million Inverell District Hospital redevelopment.

Mr Marshall said the CT scanner would be operational and begin servicing the community from Tuesday, 17 November.

“This is an exciting milestone for the Inverell Hospital Redevelopment and I’m thrilled this brand new service and important diagnostic tool has been incorporated into the new hospital building, which opened in May this year,” Mr Marshall said.

“At the very first public meeting about this redevelopment, more than five years ago, the community made it very clear they wanted a CT scanner included in the new hospital.

“Since then, the community has fought hard to make the case for the incorporation of a scanner and today is a massive win for health service provision and a victory for people power.

“While work on new hospital started in August of 2018, it wasn’t until 12 months later that Hunter New England Health confirmed the important imaging technology would be included, following a hard-fought and vocal community campaign.

“The hospital has never offered a CT service, which uses a combination of X-Rays and a computer to take images of parts of the body, showing more detail than a regular X-Ray.

“The machine is located in the new imaging department and complements the existing X-Ray service, providing additional diagnostic and imaging capacity for the hospital.

“Staff and clinicians provided input into the design for the new CT room, which features an advanced Siemens CT scanner.

“This is just another example of how the Inverell Hospital Redevelopment project is delivering a modern hospital with enhanced services that will cater for the changing needs of the region into the future.”

Mr Marshall acknowledged the efforts of Inverell health advocate Bob Bensley and Inverell Shire Council for their continued advocacy of the project.

“This outcome means residents will have 24/7 access to a CT scanner, in particular on weekends, without having to be transferred to Armidale for imaging or having to wait until the private provider is open,” he said.

“Results like this don’t just happen and I thank Bob and Inverell Shire Council for their continued campaigning on this issue and ensuring Inverell has the best possible health services.”

Stage 2 of the redevelopment is now underway and includes refurbishing the old hospital to allow the existing community health services to be relocated from their current premises to a more contemporary setting. Stage 2 is expected to be complete in May next year.

Once the redevelopment project is complete, all acute and community health services will be co-located under one roof providing greater integration of services for staff and patients.

Mr Marshall also announced today that as part of stage 2, the old terracotta tile roof would be replaced with a modern fixture.