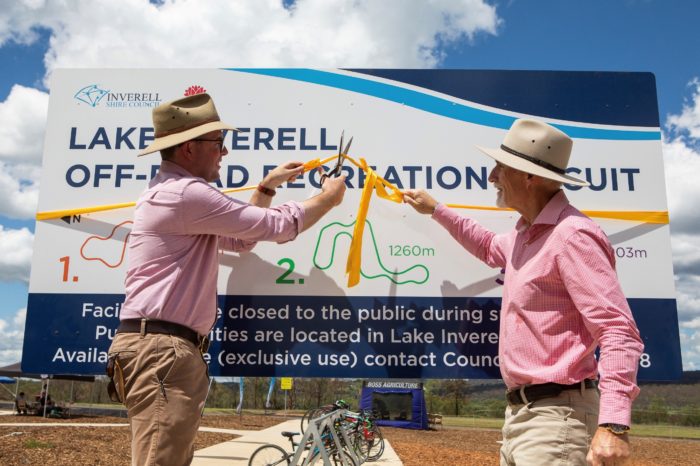 Inverell Cycling Club hosted the event to highlight the various groups which would benefit from the 1.5 kilometre bitumen sealed circuit and associated amenities.

“Whether you’re a serious cyclist, part of a running club or just looking for a place to go for a walk with the family, the off-road recreation circuit is the perfect space for you to train and be active,” Mr Marshall said.

“With the bitumen laid and grass starting to grow, the circuit looks every bit the premier sporting complex we all hoped it would, with cyclists from as far as the Gold Coast and Newcastle coming to town to see what Inverell is bragging about.

“At its heart this track is about accessibility, and with its three different circuits, grassed area and footpaths the track caters for everyone no matter their level of mobility.

“A hand-cyclist from Coffs Harbour was at the opening and he was particularly excited about the opportunities the track presents for people who compete in a wheelchair.

“I congratulate council for working with the Inverell Cycling Club to develop a facility which services the needs of the entire community.”

Mr Marshall said it’s only been complete for a couple of months but the new facility had already put Inverell on the map.

“The Grafton to Inverell classic cycle race is an important event on the town’s calendar which draws hundreds of riders annually,” he said.

“It’s now been confirmed a criterium event will be added to the Sunday of this year’s race, as a way of keeping cyclists in town overnight and spending money in the economy.

“I think this facility is capable of delivering so much to the community and I look forward to seeing what exciting events and races develop into the future.”

The NSW Government provided $1 million towards the development of the recreation circuit, with Inverell Shire Council contributing the remaining $400,000.