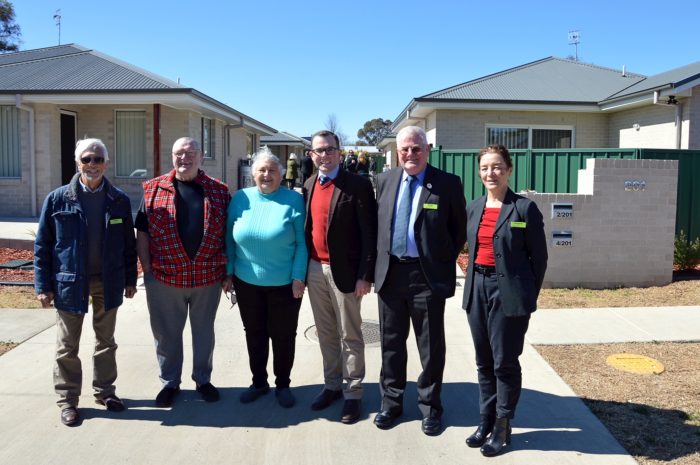 LOCAL State MP Adam Marshall has officially opened a second new stock of social and affordable housing in Armidale, welcoming it as another valuable investment in improving quality accommodation for low and middle income rental tenants.

Mr Marshall joined community housing provider Homes North on Monday at the new $1.7 million five-bedroom villa complex in Chapel Street, praising the development as a great partnership between Homes North and the NSW Government that is delivering affordable housing to more people.

“This second housing complex is a great credit to the not-for-profit Homes North and represents a real commitment to improving home affordability for residents on fixed and low incomes,” Mr Marshall said.

“And importantly this complex also provides access to quality housing for people who have mobility challenges because it has been built to meet the highest liveable design standards.

“Homes North uses the income generated from rents of public housing, as well as that generated from some sales of older housing stock, to invest back into the social housing market.

“This great new complex is an example of just what is being achieved under that business plan and I’m proud to have been involved in it.”

Homes North CEO Maree McKenzie said Hibbards had been the builder for this complex as well, off the back of the success and high quality design standards set from that initial partnership.

“We are proud to make this new complex available in Armidale to those who need it in our community,” Ms McKenzie said.

“The quality of design and build allows our households to live in dignity without breaking the bank. The build reduces power costs, and we ensure residents don’t pay more than 30 per cent of their income in rent. All in all, residents can live a better quality of life because of the reduced financial stress – knowing they can afford other basic living costs such as clothing, medical care and education.”

Mr Marshall said affordable rental housing wasn’t only a city based problem and that the 2016 census reported 14 per cent of Armidale households were experiencing “housing stress”.

“That’s where the household is paying more than 30 per cent of their income in rent to keep a roof over their heads, so you can see that building more housing properties like this one is so important to the social and economic wellbeing of many people in this electorate,” he said.

“And the new housing stocks are setting new benchmarks for affordable housing; Homes North is creating homes designed to be energy efficient, modern and flexible, but also meeting the demands of people who need them, because the demographics of the low and middle income earners looking for home like this are changing and the types and styles of accommodation is also changing to meet that profile.”

The Chapel Street complex has two and three bedroom homes to offer a range of options for single people, couples and families looking for affordable rentals.

Homes North has now delivered 30 new affordable homes across the New England since 2011.

“This is another great project and the NSW Government was pleased to support Homes North in accessing the finances to complete the build and provide such a bright future for the residents,” Mr Marshall said.

“I know Homes North is working on more partnerships that will deliver mixed tenure housing in various locations across the New England North West and I commend them for that.”