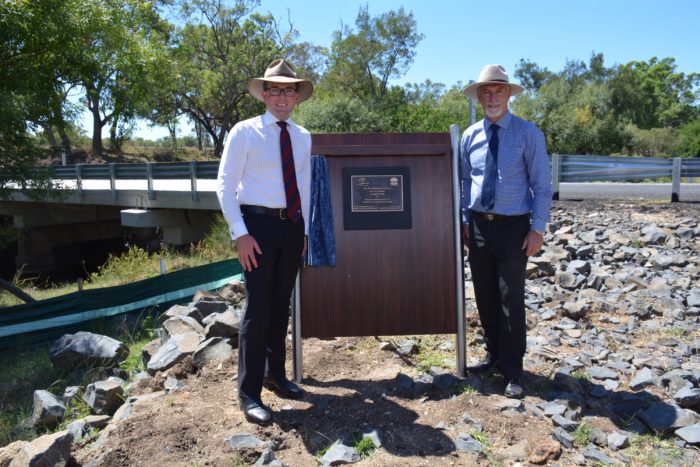 The new higher and wider two-lane concrete structure replaces its almost 70-year-old single-lane timber predecessor, which was unable to carry heavy vehicles and was often topped by floodwaters. The new bridge will allow B-double trucks through, for the first time on the road.

The project was made possible through an $800,000 NSW Government Fixing Country Roads grant and $200,000 from Inverell Shire Council.

“Today’s opening will be a breath of fresh air for producers and local residents, who can finally be certain that the quick road to Inverell is open rain, hail or shine,” Mr Marshall said.

“As the second-last remaining timber bridge in the Inverell Shire, replacing this bridge has been an absolute priority for council and the local community.

“This concrete dual carriageway will reduce trip times, improve reliability after torrential rain and allow the passage of B-double trucks for the first time.

“The Graman area is renowned for its productive pastures and this infrastructure will help get local producers the best bang for their buck when transporting sheep, cattle or grain into town and beyond.”

Mr Marshall said the low-lying crossing had been a frustration for the Graman area, spanning generations and many successive councils.

“Current Councillor Neil McCosker’s grandfather first pioneered efforts to improve the crossing from 1922 onwards, culminating in the construction of this timber span in the late 1950s,” Mr Marshall said.

“Back then, the bridge cost just £6,200, or roughly $200,000 today. Six decades after the first crossing was opened, Inverell Shire Council has provided the same funding to future-proof the Tin Tot Bridge for decades to come.”

Mayor Paul Harmon lauded the opening, saying the project relieved a “major headache” for the community.

“We know this is a significant thoroughfare for the primary producers in this area, where we had a single, one lane, timber bridge on a school bus route,” Cr Harmon said.

“The former bridge had a load limit on it, leaving primary producers unable to travel on it when they had to take produce to market, forcing up their costs.

“This $1 million project is a victory for local producers, and is a milestone in Inverell Shire Council’s efforts to replace timber bridges.”