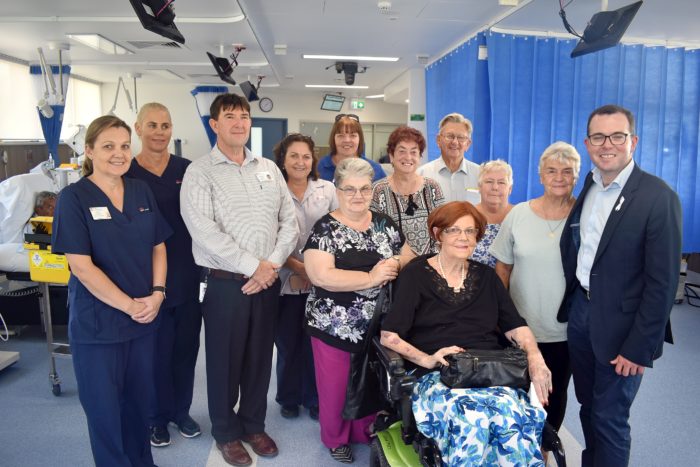 Mr Marshall did the official honours after a morning of treatment for a number of locals who can now enjoy a purpose-built unit next to the local hospital.

He was joined by health and medical executives and hospital staff, civic leaders and family and supporters of renal patients.

Mr Marshall said the day honoured patients and civic and community leaders who have worked so hard to see the new eight-chair unit become a reality.

“The first patients have already been treated here at the new unit, but today’s official proceedings are a public testament of the will and willpower of locals to make it possible and a celebration of modern medical advancement for everyone,” Mr Marshall said.

“This unit heralds a new era for renal treatment in Moree, with a more spacious and comfortable area for both patients and hospital staff.

“This new unit has been built with the future health care needs of the Moree district in mind, equipped with three extra chairs so we can meet present demands but also critically, what we know will be growing renal patient numbers.”

The first sod for the unit was turned in April after Mr Marshall had mounted a campaign for the project funding on the back of a demonstrated demand and need for a new modern facility that could treat more patients.

“The old unit was cramped, at capacity and in high demand that couldn’t be met and that forced many to travel long distances for treatment or even buy home dialysis equipment,” Mr Marshall said.

“And for many patients with end-stage chronic kidney disease home treatment just wasn’t an option either, and for others, the cost and access of going out of town for treatment was prohibitive and problematic.

“Until this unit, we had many locals who had been forced to endure a six-hour round trip to Tamworth three times a week for dialysis treatment, so this is a huge improvement for people in that situation.”

Mr Marshall said the new unit also contained an isolation chair, essential for patients at risk of infection or who required private treatment, something not previously available in Moree.

“And no matter how hard they tried, including extra shifts to treat more people, hospital staff were strapped when it came to renal dialysis for many, so they can be well proud of their efforts in doing what they’ve done for their people, but also in helping support this drive to get where we’re at today,” Mr Marshall said.

“We also need to pay tribute to civic leaders, community supporters and especially the Moree Renal Support Group, which helped fund the original unit, and has been instrumental in getting public and government support for this project.

The new facility has been built by regional company Rice Constructions.