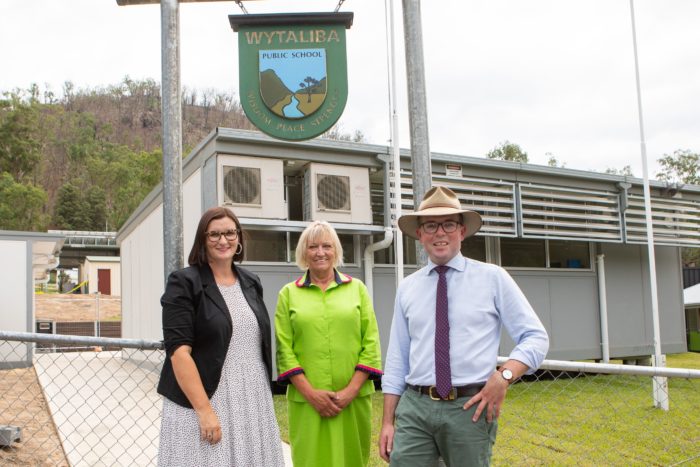 The Kangawalla Fire swept through the small community in early November last year, destroying three of the school’s four buildings as well as a large number of residential dwellings.

Mr Marshall said the completion of the new school in less than three months was a large first positive step towards rebuilding the lives of those who had been devastated by fire.

“This is a special day for the Wytaliba community,” he said.

“Not only do they have a new and improved school, but it’s the positive psychological impact this has on people seeing the first tangible signs of their community being put back together.

“Immediately following the destruction of the school last year the State Government committed to rebuilding a bigger and better Wytaliba Public School and here we are the start of Term 1 with students back in class.

“This really has been an incredible effort by the Department of Education and army of local contractors who, in the space of a month, have installed three new demountable buildings which be used as a classroom, teacher’s space, library and toilet block.

“While work on the main buildings are mostly finished a construction site will remain in place during this term while landscaping continues and the all-important new playground, covered outdoor learning area (cola) are finished.

“There has been a considerable focus placed on ensuring the new school meets the required planning regulations and an assessment has been undertaken by an engineer which states all works have met required standards and codes.”

Minister Mitchell thanked Principal Debbie Hunter and teacher Kelly Murphy for their efforts getting classrooms set up and ready for the year.

“Currently there are eleven students which have started the school year at Wytaliba,” Ms Mitchell said.

“I want to personally thank all the school staff for the steps they have taken this week to welcome students back and make their first week of term as normal and comfortable as possible.

“The State Government has given the undertaking in communities like Wytaliba affected by fire that staff numbers won’t be impacted if there is a decline in enrolments due to population movements over the school year.

“I am incredibly proud of the new Wytaliba School which I think is going to serve the community well for many years to come.”