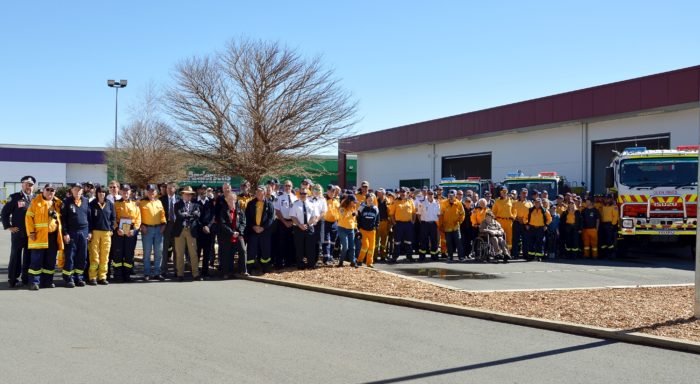 Around 150 RFS volunteers and members of the community turned out for the occasion, witnessing the launch of the Lambeth Street complex, which is now the headquarters of the Northern Tablelands fire district and the new nerve centre for the RFS fighting fires across the three local government areas of Inverell, Glen Innes Severn and Tenterfield.

“That’s an area covering over 21,000 square kilometres so this control centre equips local RFS crews with the modern tools to battle fires across the tablelands,” Mr Marshall said.

“It is the most advanced headquarters to manage emergency situations anywhere in country NSW.”

“This multi-million fire control centre equips local RFS crews with the modern tools to battle fires across the State’s north, including 400,000 hectares of national parks and forests,” Mr Marshall said.

“This impressive modern and centrally located structure will allow greater communication and response to major fire incidents across the District as well as being the home of the Glen Innes brigade, which is based in a separate two truck bay facility.”

“This is a long awaited development because the RFS had outgrown its cramped headquarters, the former Severn Shire Council Chambers, in Bourke Street, but the new premises allow for future expansion, including four new jobs coming with the new headquarters,” Mr Marshall said.

“It’s great to see the old Betta Electrical building repurposed, to allow the RFS to consolidate their services, including their ability to manage remote fires and coordinate aerial water bombing.”

Saturday’s opening also honoured veteran members with the presentation of 29 medals and clasps to 29 RFS people who between them have given a total of 677 years of service, including Wellingrove brigade captain Terry Boyd, who was recognised for his 59 years of volunteer service.

Mr Marshall said the tanker and vehicles would provide a greater level of fire protection to local communities.