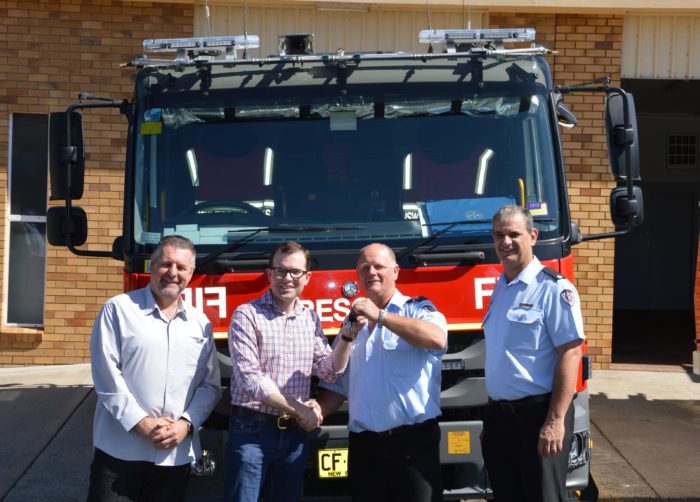 FIRE, emergency, paramedic and rescue services across the Uralla district received a huge boost at the weekend with the delivery of a brand new purpose-built $450,000 rescue tanker to the Uralla Fire & Rescue Station.

Northern Tablelands MP Adam Marshall was joined at the station on Saturday morning by Mayor Michael Pearce to hand over the keys to the new Mercedes Benz vehicle to station captain Rodney Hargrave.

Mr Marshall said the new tanker replaces an outdated IZUZU model which was reconfigured years ago to deal with Uralla stations dual roles.

“For the last nine years Uralla has been one of only a handful of Fire & Rescue Stations which also perform first response duties for ambulance services, attending the scene of incidents to administer first aid and paramedic treatment until ambulances arrives from Armidale, Tamworth or Walcha, depending on the location of the incident,” Mr Marshall said. “The firefighters undergo ambulance training to complement their roles.

“Therefore Uralla is one of the busiest stations in the region, with more than 330 call outs last year, most of which were ambulance related.

“When it comes to frontline emergency services, you don’t get any more frontline than standing face-to-face with fire and medical emergencies, saving lives and property.”

“It has a water spray cabin protection system that can be operated to protect the crew. The vehicle can also be used for structural firefighting and for rescue work,” Mr Marshall said.

“The new rescue tanker is equipped with a 2,700 litre water tank and specialised storage for rescue equipment.

“The crew of the Uralla station do a wonderful job, love what they do and now have a state-of-the-art purpose-built vehicle to help them do their jobs even better.”

Fire & Rescue NSW New England and North West Zone Commander Superintendent Stephen Hirst said fire and rescue officers at Uralla Fire Station did an extraordinary job in protecting their community and this new rescue tanker would help them to perform their work even more effectively.

“Fleet upgrades such as this ensure our fire and rescue officers have the best equipment and the latest technology to ensure the safety and protection of local communities.”

Superintendent Hirst said Uralla fire and rescue crews, led by Captain Rodney Hargrave and Deputy Captain Stephen Frazier, did a tremendous job responding to fires and other emergencies as well as actively promoting fire safety in the community.