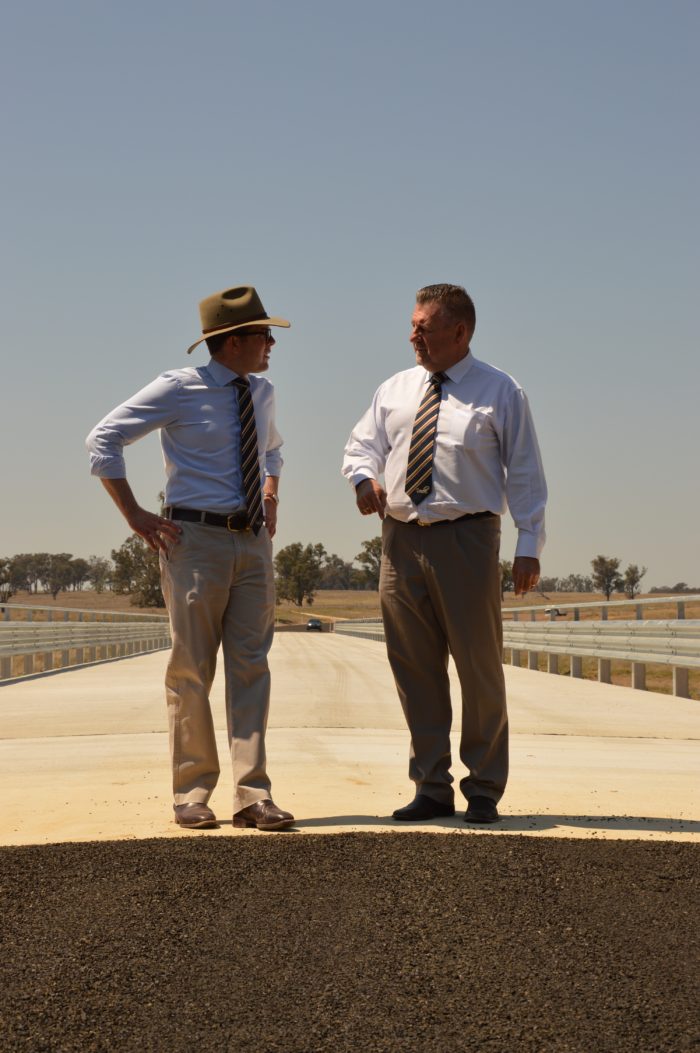 WITH a final lick of bitumen to the road approaches, Bundarra’s long-awaited new $4 million bridge on the Thunderbolts Way – the Emu Crossing Bridge – was thrown open to traffic today.

Member for Northern Tablelands Adam Marshall said he was ‘stoked’ to be behind the wheel driving the first car across the new dual lane 150-metre long and eight-metre wide structure with Uralla Shire Council Mayor Michael Pearce riding shotgun in the passenger seat.

While the official opening of the bridge and community celebrations are scheduled for early November, Mr Marshall said 70 years was long enough for the community to wait for a new crossing and was delighted that Uralla Shire Council had completed the work ahead of schedule and allowed traffic to begin using the bridge.

“This is an historic day for the Bundarra community and a fabulous one for the wider region,” Mr Marshall said. “I know many locals thought they’d never see a new bridge over the Gwydir River at Bundarra, but here it is and it looks a treat.”

The NSW Government committed $3.5 million to the project and Uralla Shire Council found the remaining $500,000, which included the 1.6 kilometres of new road approaches.

“Thunderbolts Way is a key regional transport and freight route with in excess of 600 vehicles a day using the road and the low-level, one way crossing, which was built almost 100 years ago (1919) and had well and truly reached its use-by date,” Mr Marshall said.

“It was regularly closed during minor flooding, resulting in a 95 kilometre detour for road users, which was costly for the transport industry.”

Congratulating the Bundarra community on its hard work and perseverance, Mr Marshall said he was proud to partner with Uralla Shire Council and the local community to deliver this important infrastructure project for the region.

“The local community has been seeking a new bridge for more than 70 years and as early as 1935, the then Gostwyck Shire Council began making representations to the State Government for financial assistance to replace the crossing,” he said.

“I congratulate the community for pursuing this with dogged determination – we wouldn’t have this wonderful new asset without their efforts.”

Mr Marshall said the road was a key transport and freight route for the people and businesses of the Northern Tablelands, with 30 per cent of the vehicle movements day being heavy vehicles hauling goods in and out of the region.

“Thunderbolts Way is the only direct transport route between the towns of Bundarra, Bingara, Warialda and Inverell in the west, connecting to Armidale, including to the Armidale Airport and the state’s road network,” he said.

Mayor Pearce said that he and the council were proud partner with the government and Mr Marshall and play a part in delivering such an important piece of infrastructure.

“Honestly, we never thought this day would come and it’s amazing to be standing here and seeing it finally finished,” Cr Pearce said.

“This new bridge will make a huge difference to the communities along this route and it’s great to think that we won’t have to worry about detours anymore, it’ll take a hell of a flood to close this bridge.”

NSW Roads Minister Duncan Gay will officially open the new Emu Crossing Bridge on Monday, 9 November, and he will also be turning the first sod on the construction of the new Abington Creek Bridge, also on Thunderbolts Way.

The old Emu Crossing Bridge will remain intact, however it will no longer have vehicle access.