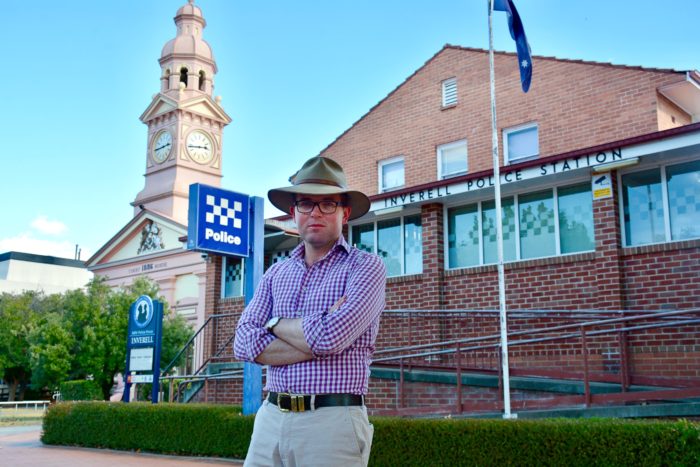 Northern Tablelands MP pictured outside the dilapidated Inverell Police Station, which will be knocked down and rebuilt thanks to $8.5 million in today’s NSW Budget.

A THREE-YEAR campaign for a new 24-hour Police Station in Inverell has been officially won today, with the 2018-19 NSW Budget allocating $8.52 million for the knock down and rebuild of the dilapidated police buildings in the centre of town.

An elated Northern Tablelands MP Adam Marshall paid tribute to the strong support of Inverell Shire Council and the local Police for the result today.

“I am so pleased for our local police and the Inverell community today,” Mr Marshall said.

“Many didn’t think we’d ever get to this point, but today we’ve got the money in the bag and now the detailed design work can begin in earnest to build a new olive station to meet the police needs of Inverell for the future.

“The new station will be designed and built with plenty of space to house additional police and modern technology to give our officers the resources and support they need to keep our community safe well into the future.

“A huge thank you to the community, council and the local police for all their support and help with this successful campaign. Together we have achieved a wonderful result today”

The local MP has maintained pressure on the government since 2015 to deliver the new station, to replace the 58-year-old out-dated and inefficient building, which is “inappropriate for modern policing and the law and order demands of the growing Inverell district.”

“We are going to need more officers working at Inverell’s 24-hour police station in the coming years and they simply won’t fit in the current facility. It is nearly 60 years old, but more important than its age is that policing has changed dramatically in that time and its demands are not matched by the antiquated facilities.

“There are 46 full-time police and staff currently crammed into the station, which was built in 1960, when Inverell was less than half the size it is today and had only 14 police working in the same space.

“There’s also a police boat and 13 vehicles, that sit out in the open due to a lack of storage space onsite.

“There is still only one interview room, there’s only a makeshift female locker room, the muster room is too small and people giving statements have to be walked past officers’ desks.

“Detectives have taken over the police residences in order to some basic semblance of an office from which to work from, as the station is quite literally overflowing.

Minister for Police Troy Grant acknowledged the efforts of Mr Marshall, Inverell Shire Council and the community in lobbying the government for the new station.

“The strong lobbying led by Adam ensured this new police station was always high on my agenda,” Mr Grant said.

“The local Police have been very patient and I thank them for their work in the local community.”

Planning work on the new station and a temporary station while the old is being demolished and rebuilt, will now get underway.