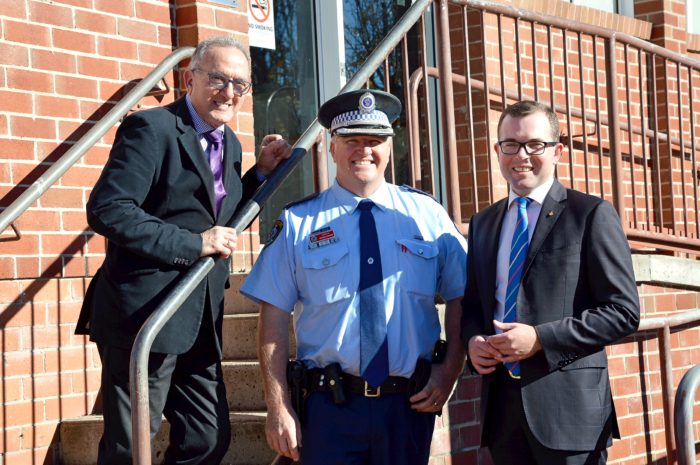 THE long-awaited demolition of the old and construction of the new 24-hour Inverell Police Station will now enter the detailed design phase, Northern Tablelands MP Adam Marshall has announced.

With the recent 2018-19 NSW Budget allocating $8.522 million to knock-down and rebuild the overcrowded and dilapidated 60 year-old-station, work will soon begin in earnest to kick off the project.

“I’m delighted to be able to provide an update on the new station to our local police and the community so soon after the exciting Budget news,” Mr Marshall said.

“The community, local police, Inverell Shire Council and I have spent three years campaigning to get the money and now we can finally get to work designing the station that our local police so desperately need.”

Mr Marshall said initial plans were being drawn up based on the basic site specifications.

“There will then be multiple rounds of consultation with local Inverell police, Chief Inspector Rowan O’Brian and the New England Police District Superintendent Scott Tanner, with all officers working in and from the Station able to have a say and provide valuable input in the design stage,” he said.

“This ensures the Police Station will accurately reflect the on-the-ground needs of the local police force.

“The first round of consultation is scheduled to start in October with the view that the plans will be finalised by the end of the year.”

The current station houses 46 full-time officers despite only being built for less than half that number. Largely unchanged since the 1960s, it is currently the only 24-hour Police Station in the region that is more than 10 years old.

“Construction will commence on the new station in early 2019,” Mr Marshall said.

“Once the knock-down-rebuild starts, all Inverell Police Officers will be moved together to a new temporary location. Multiple sites around Inverell are being assessed for their suitability with the requirement that officers are kept together.

“Their interim home will either be an existing building or an entirely new ‘greenfields’ site will be temporarily constructed to house the officers, support staff and vehicles.

“I know the local police are eagerly looking forward to the design process starting and the entire community, including me, will be excited to see work underway in early next year.”