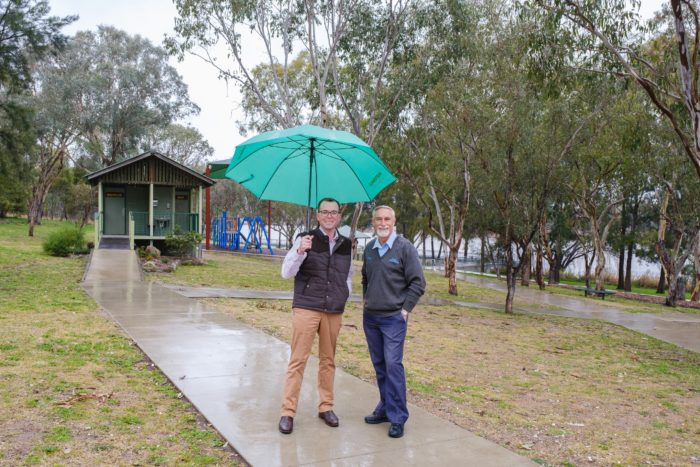 A PROJECT to make Lake Inverell more accessible to people with limited mobility has received funding, with Northern Tablelands MP Adam Marshall today announcing a $369,220 grant to construct a wheelchair accessible amenities block at the reserve.

The grant has been delivered through Stage Two of the Bushfire Local Economic Recovery Fund, co-funded by the NSW and Australian Governments.

Mr Marshall said the addition of amenities near the Lake Inverell carpark would complete the all-abilities redevelopment of the spectacular nature reserve.

“Last year council officially opened a new boardwalk and network of pathways along the water’s edge, along with improved disabled vehicle parking.

“To further enhance this space a disabled toilet block will be built near the carpark, providing easy access for individuals and tour groups calling into the lake.

“With this last component of the all-abilities project funded council is expected to start construction before the end of the year with the project expected to be complete by mid-2022.”

Since 2018, $880,000 in State Government funding has been spent on improving facilities at Lake Inverell.

Inverell Shire Mayor Paul Harmon said there has been an exponential increase in the number of people visiting Lake Inverell since the improvements started.

“A community survey in 2017 showed over 65 per cent of the population regularly used Lake Inverell – I think that figure would now be close to 75 per cent,” Cr Harmon said.

“While there is lots of additional foot traffic in that area council wants to make sure those who rely on wheelchairs or walkers can also enjoy all the lake has to offer.

“The addition of wheelchair accessible amenities will make sure Lake Inverell is a welcoming and safe space for all, and I thank both levels of Government for their ongoing support of this project.”