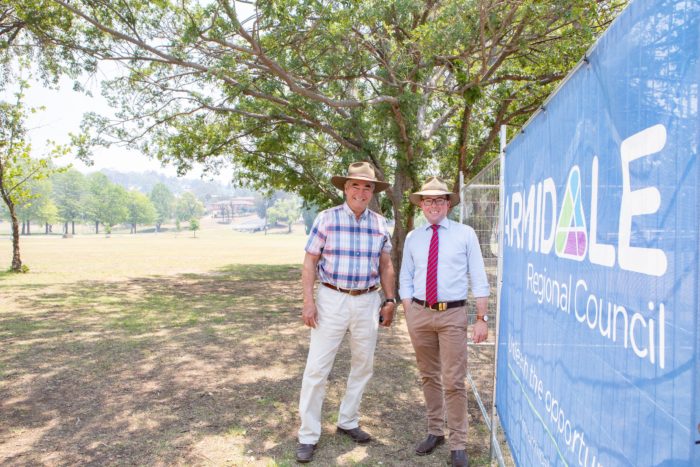 Armidale Regional Council received a $999,700 State Government grant for the project in September last year and Mr Marshall said he’d been assured by council that by the end of 2020 Armidale would have a children’s playground which will be the envy of towns across the region.

“Whether it’s a pirate ship or princesses castle, over the next 12 months we are going to see Curtis Park transformed into a children’s wonderland where the only limits are a child’s imagination,” Mr Marshall said.

“Council has erected fences around an area where new amenities will be built and is installing electricity, water and sewerage services in preparation for construction to start in March.

“This week Council will call for quotes to design and build the playground with the period for submissions open until the end of January.

“It’s expected by February we should have our first glimpse of what equipment at the park will look like, with early suggestions it will include a number of colourful climbing structures, swings and even a flying fox.

“This is a great opportunity for Armidale to grow its reputation as a city which embraces families and provides accessible facilities for people of all abilities.”

Mayor Simon Murray said other communities across the region had seen the economic benefits which flow from having a quality children’s playground.

“Curtis Park is located on Dumaresq Creek, it joins Armidale Visitor Information Centre and is walking distance to the city’s CBD making it the perfect place for a project of this kind,” Cr Murray said.

“Wherever large scale playgrounds are built foot traffic follows, and I think with our planned location in the middle of town we will see an increased flow of people into the mall and into businesses.

“The super playground will be a fantastic asset for our community, which will keep our kids active – physically and mentally – and encourage families to spend valuable time together.”