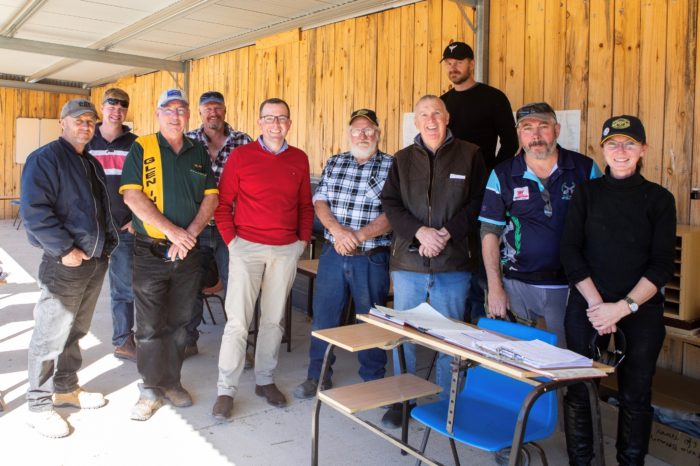 FACILITIES at Emmaville Rifle Range have fired ahead with a new amenities block funded by a $45,210 State Government grant driving efforts to secure major shooting events for the region.

Northern Tablelands MP Adam Marshall visited the range last weekend and said the funding has allowed the range to become more accessible to shooters by installing an amenities block, complete with two showers and two toilets, and access ramps, suitable for people with a disability.

“The Emmaville Rifle Range is a major drawcard for the community and now it has a bathroom which will allow it to grow its membership and attract more competitors to the community,” Mr Marshall said.

“Building the bathroom was no easy feat with the committee having to get a crane in to unload the pre-fabricated block, before installing the enviro-cycle septic system, rain water tanks and pumps making it self-sufficient.

“Already the rifle range is utilised by multiple clubs each Saturday but with ramps and grab rails part of the upgrade, I expect we will be seeing a whole new group of people getting involved, particularly women and juniors.”

“The range’s committee has been working hard to bring both its competition and ground facilities up to the highest standard and it’s exciting to hear there’s a likely chance the 2020 NSW Service Pistol titles will come to Emmaville next May,” Mr Marshall said.

“This event could draw up to 50 of the best pistol shooters from NSW and southern Queensland to Emmaville who would inject thousands of dollars into the local economy over a three day shoot.”

Range Committee Secretary Evan Brown said the committee had been working hard to make range more accessible to shooters for some time.

“Every year we have worked to tackle one project at a time, trying to make the Emmaville range a place where people are comfortable, want to visit and take part in a great sport,” Mr Brown said.

“Shooting is something people living with a disability can be involved in and with the all access toilet facilities complete I’m hopeful we may see some new shooters join up.

“We as a committee are now taking aim at our next project, looking for funding to build a new clubhouse which can cater for not only our current shooters but potential new competitions or major events which are looking to utilising our ranges.

“I want to thank Adam and the State Government for supporting the club and look forward to working with him to hopefully secure a new clubhouse.”

The committee should know sometime after September if its bid to host the 2020 Service Pistol titles has been successful.