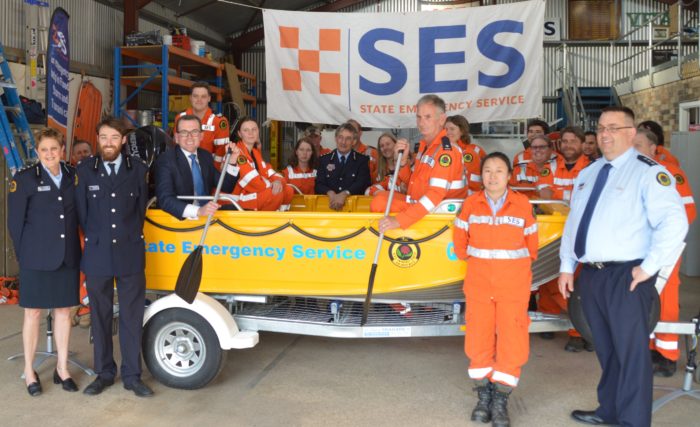 Member for Northern Tablelands Adam Marshall with Armidale SES Unit volunteers last year with one of their new rescue boats.

The next phase of the fleet replacement strategy for the NSW State Emergency Service (SES) that will give the agency more support to continue and expand the ongoing replacement of the operational fleet, including boats, trailers and specialist vehicles will be completed soon, Northern Tablelands MP Adam Marshall said today.

“This much anticipated package will build upon a pivotal five-year period for the SES, which has seen hundreds of older vehicles sold or gifted to the NSW Government, and 181 brand new vehicles introduced across the state, including our region,” Mr Marshall said.

“With those vehicles now in state hands, our region’s dedicated SES volunteers can rest easy knowing that operational vehicles are being centrally managed by the SES and adequately maintained. The days of pushing local councils for maintenance money are over.”

Mr Marshall said the next stage of the fleet replacement strategy is an opportunity to engage volunteers for feedback and advice to ensure best resourcing to local communities.

“This will not only mean vehicles can incorporate modern gear and technological improvements but ensure our state’s crews can effectively work together to provide a reliable, prompt, safe and consistent response in times of emergencies,” he said.

The local MP said during a productive meeting with SES Commissioner Mark Smethurst last week, he received assurances that the NSW SES was working with Infrastructure NSW, Treasury and the Department of Justice to finalise the next stage of the operational fleet replacement strategy.

I’ve sought and received assurances from both the new SES Commissioner and Minister for Emergency Services that the strategy is near completion,” Mr Marshall said.

“When the next stage of the NSW SES operational fleet replacement strategy is finalised it will position the SES to do what they do best – providing a valiant first line of defence against storms, floods and other natural disasters.

“Our volunteers deserve the best equipment and vehicles we can practically provide and I’m pleased, that after concerns were raised and assurances sought, the new strategy will soon be in place.”

The NSW Government committed additional funding of $46 million over the last five years for the procurement, maintenance and control of the NSW SES operational vehicle fleet.

This funding was part of a $96 million Strategic Disaster Readiness Package announced in response to the 2011 Queensland Floods Commission of Inquiry.

“Just as the NSW SES is committed to protecting us from nature’s worst – the NSW Government is committed to helping volunteers across the Northern Tablelands with the funding and vehicles they need,” Mr Marshall said.