NEW AND UPGRADED TENNIS COURTS AN ACE FOR GLEN INNES 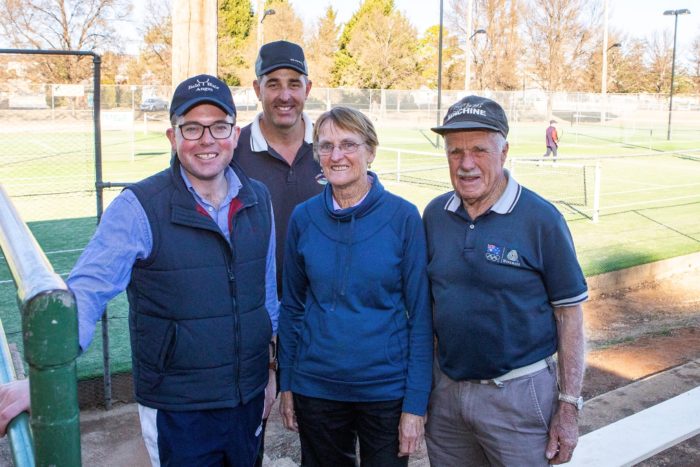 IT may be a far cry from Wimbledon but the Glen Innes & District Tennis Association now has courts which Ash Barty would be proud to walk out on with two upgraded surfaces open and being played on by members.

Northern Tablelands MP Adam Marshall donned his sweat bands, dusted of his racquet and took to the new courts last Saturday to play a set with Club Vice President Peter Haselwood and life member and officially open the refurbished courts.

“These courts at the tennis complex are the only ones in town and with the popularity of tennis as a sport, they get a fair work out,” Mr Marshall said.

“All up the club has close to 100 playing members, both senior and junior, and runs men’s and women’s competitions nearly every day of the week so it is important it has a top notch playing surface which can not only handle a high amount of foot traffic, but is safe for competitors to play on.

“With a coach currently operating out of the Glen Innes Tennis Complex now is a great time to promote the sport locally and potentially attract some new players to the game, encouraging kids and adults alike to get outside and be active.

“The new courts are brilliant and follow a similar upgrade project a few years ago.”

Mr Haselwood said the new courts will help turn the club around.

“We have been patching up the old courts for several years now because unfortunately the club hasn’t been in a financial position to pay for them to be fully resurfaced,” Mr Haselwood said.

“Now we have a total of seven quality courts which really makes the club attractive as a host for major competitions like our Far Northern Championships.

“The club’s focus now is to increase our junior numbers in the hope they will stay on and play competitive as adults.

“Now the courts are done our next project is to build a new chain link fence around the tennis complex to make the facility more secure.”