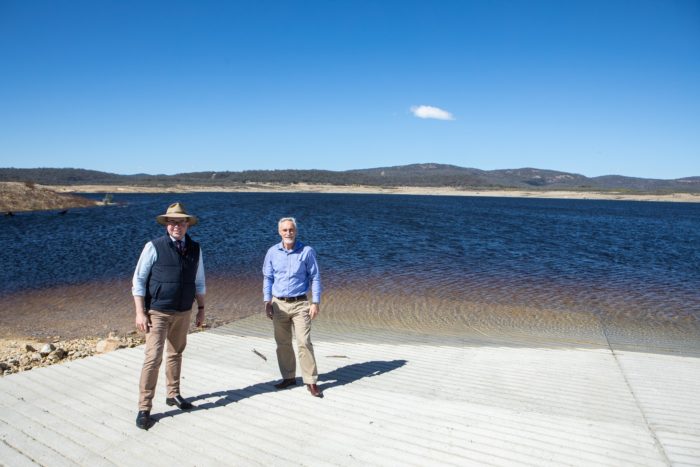 The water level is not the only thing on the rise at Copeton Dam’s Northern Foreshore, with Northern Tablelands MP Adam Marshall and Inverell Shire Mayor Paul Harmon inspecting groundworks for the new communal hall, amenities block and caretaker’s residence last week, all part of the $5.7 million redevelopment.

Mr Marshall said trophy fish and first-class facilities would soon be the catch-phrase for the popular campsite and reserve.

“Seeing the work which has been done on the Northern Foreshore in recent months, it’s not hard to get excited about the boundless tourism and business opportunities this project will eventually reel in for Inverell,” Mr Marshall said.

“The project has already made headlines – and records – with Copeton now home to the longest boat ramp in Australia, which means people can get their boats in and out of the water, whether the dam is at eight per cent or completely full.

“Everywhere you look there are builders hard at it, either on the earthworks for the 1.5 kilometres of shared footpaths which will connect visitors to different areas of the reserve or the exciting new communal hall.

“With panoramic views of the dam and the capacity to seat 100 people, the hall will be the perfect venue for community functions. Council is in the process of awarding the tender for construction, with the view the project will be complete by the end of January, 2021.

“Tenders will close for the construction of the children’s splash park early next month, while the new children’s playground has been ordered and will be installed in October.”

Mr Marshall said September would be a huge month in the life of the redevelopment, with the new caretaker’s residence and amenities block being delivered.

“Visitors will know they are in for a great stay at Copeton Dam as soon as they drive through the gate and see the high quality Uniplan building which will make up caretaker Tom Stapleton’s new residence,” he said.

“The demolition of the existing building is underway, before the new prefabricated Uniplan building rolls onto site early next week.

“The new amenities block will also arrive next month, with Uniplan tasked to construct a shower facility with disabled access. The old toilets will be transformed into a communal laundry.

“Every stage of this project has been designed to allow access for all, and I seriously think the tourism opportunities it presents will inject millions into the economy each year, helping it to rebuild after years of drought and the pandemic.”