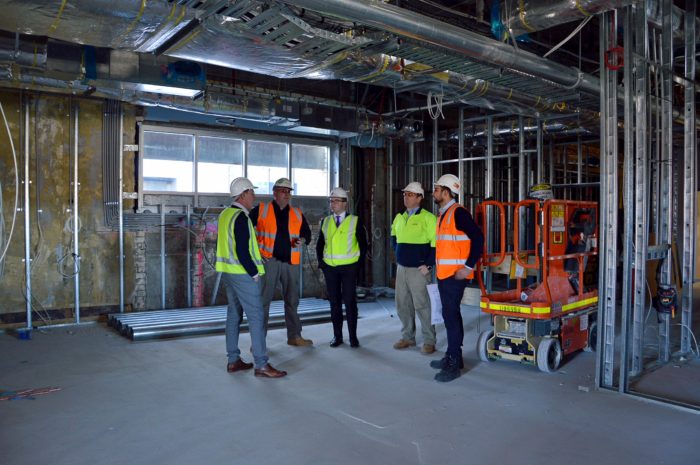 MEMBER for Northern Tablelands Adam Marshall has toured the latest stage in the $60 million Armidale Rural Referral Hospital redevelopment, which brings the revamped health facility one step closer to being unveiled in its entirety.

“It was great to be able to have a tour of the works underway in the final stage of the redevelopment and see first-hand our exciting new facilities take shape,” Mr Marshall said.

“Armidale has waited a long time for this hospital redevelopment and every stage we can tick off brings us another day closer to the entire project being unveiled.”

The latest area completed was the $2.4 million kitchen facility, which is now equipped with state-of-the-art trolleys which contain both hot and cold compartments, new industrial freezers and fridges, wash area and ‘line’ area.

“The new kitchen is fully operational which is terrific and Attention has now turned in earnest to the building works on Level Two – what will be our brand new day surgery facilities and crucially the additional areas for future expansion,” Mr Marshall said.

“This part of the build is on track to be completed by the end of the year and I expect within the next six months to be able to formally open the remainder of the new ‘West Wing’ area of the hospital.”

The $60 million dollar redevelopment includes four new operating theatres, a new emergency department, a new in-patient ward, a new and expanded critical care unit and a new sterilising department. The new four-storey building was constructed to accommodate many of the new areas and has been open since February this year. Redevelopment works are currently occurring in the existing three-storey building.

“This build is future proofing the health facilities for Armidale, but also for the surrounding regions,” Mr Marshall said. “As a Rural Referral Hospital, it has been designed for future growth and that future capacity was what I saw under construction today.

“I know the community is keen to see the last of the scaffolding come down and the entire facility operate as a cohesive unit. Staff and patients have been extremely patient with ongoing work, and I can confidentially say we are now on the home stretch with the build.

“I also wish to commend the project managers and builders Richard Crookes. Both groups work closely with Hospital staff to ensure the hospital and build can function effectively side-by-side.

“The builders coordinate with Staff to ensure vital hospital services are not blocked off by works and machinery and likewise hospital staff provide up to the minute information to the builders, so there’s no major building work happening while operations are underway.

“We have the best in the business building this Hospital and their expertise was on full display during my visit. This $60 million redevelopment will be completed to the highest standard, on time and also thanks to the efforts of local tradies who make up approximately 40 per cent of the workers on site.

“Once finished, many of the highly skilled staff will head across to Inverell to begin their new hospital continuing the ‘health revolution’ the communities of the electorate have worked so hard to secure for the New England and Tableland areas.

“I can’t wait to see our new Hospital fully completed and look forward to welcoming the public into the facility for a grand opening soon.”