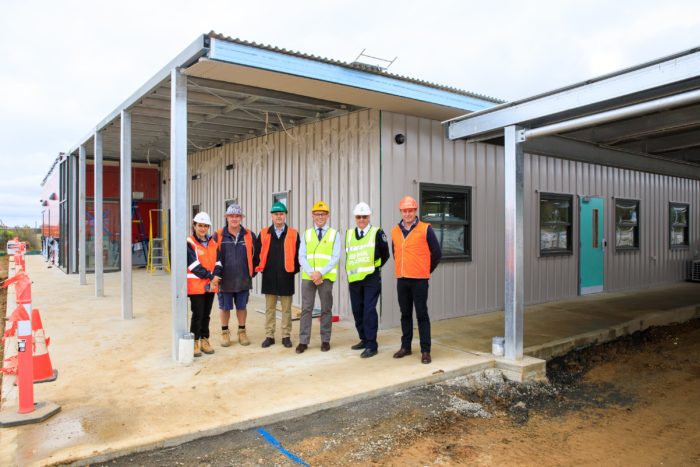 THE new $6 million New England Fire Control Centre (FCC) at Armidale Regional Airport will be complete and fully operational by the start of this year’s bushfire season, according to Northern Tablelands MP Adam Marshall, who was today joined by Mayor Sam Coupland and RFS Superintendent Paul Metcalfe to inspect the development, which is in the final stages of construction.

Mr Marshall said the RFS was on track to relocate from its outdated premises on Mann Street and into its new home by July.

“Despite some setbacks due to the wet weather, construction of the Fire Control Centre is expected to be finished by the end of next month,” Mr Marshall said.

“Work has progressed significantly this year, with the majority of the structural work complete, aside from some civil aspects which have been hampered by the rain.

“Internally, most floor coverings are down and all hardware has been install on doors, making the premises secure.

“Work is starting this week to install the high-tech radio tower which will enable the operation of the very best hi-tech digital mapping and communication technologies.

“The finishing touches including furnishings and new water tank will be installed in May, ahead of the RFS’ staged relocation over June and July.

“This is an exciting development for our local RFS team which will have its entire firefighting co-ordination and management systems consolidated at one site at the northern end of the airport.”

Mr Marshall said property owners across the New England zone should take confidence that from the start of the fire season in August the new Fire Control Centre would be fully operational.

“With capacity to accommodate a full Incident Management Team of more than 100 people the new building represents the very best in modern fire-fighting capabilities,” he said.

“Having the Fire Control Centre located at Armidale Regional Airport will enable the swift deployment of assets during major fire events and remove the need to co-ordinate fire response from Glen Innes Fire Control Centre, which was the case during the 2019/2020 ‘Black Summer’ bushfire event.

“I want to recognise the incredible amount of work undertaken by RFS management, in conjunction with Armidale Regional Council, to get the Control Centre to this stage and I look forward to the facility being officially opened and assisting in the protection of the community.”