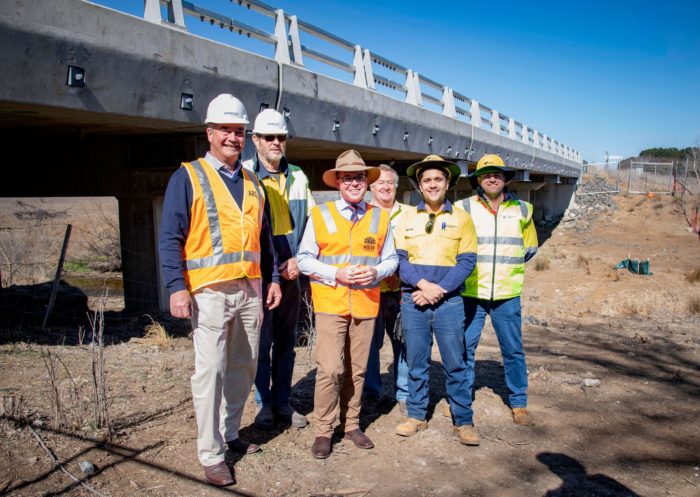 Mr Marshall and Armidale Regional Council Mayor Simon Murray inspected the $850,000 bridge project on the border of the Armidale and Uralla local government areas, part of the $10 million upgrade of the highway to reduce the road toll on the New England Highway.

Mr Marshall said he is pleased the State Government had intervened to make the drive along the highway safer.

“It’s only 18 kilometres between Armidale Airport and Uralla but too often are emergency service personnel have been called to fatal accidents on that stretch of road,” Mr Marshall said.

“Saumarez Bridge has been widened by about 1.5 metres to allow increased separation between vehicles travelling in opposite directions.

“Its old-style concrete barrier has also been upgraded to a concrete and steel system to improve crash performance and reduced future maintenance costs.

“All that’s left to do is the final paving and asphalting which will be carried out in October, when the weather warms up.”

Mr Marshall said all up $8.2 million has been spent on the New England Highway south of Armidale as part of the NSW Government’s Saving Lives on Country Roads program.

“While it may have been an inconvenience for motorists while roadworks were taking place, what we have now is nearly three lanes of open highway which will improve both travel times and safety for drivers,” he said.

“One death is too many and I’m hopeful over time these upgrades will result in a reduction in the number of serious accidents which take place.”