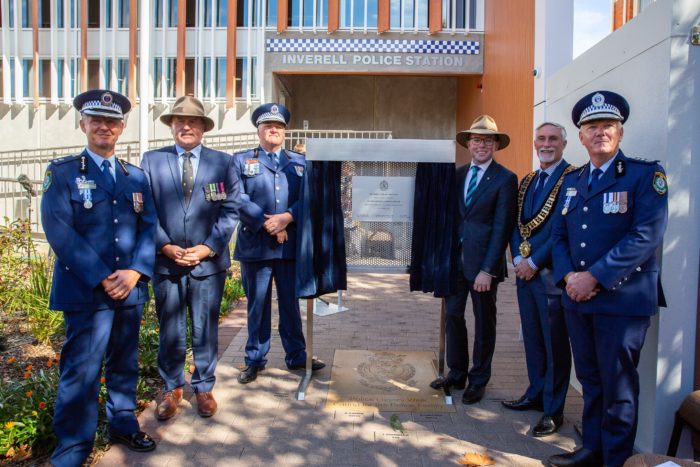 The Inverell community lined Otho Street as local officers conducted a march past the station, led by the full NSW Police Band, to mark the auspicious occasion.

Mr Marshall said the fanfare was a defining moment for the development of Inverell as a regional centre and marked the end of a community campaign which has spanned over half a decade.

“It cannot be understated what this project means in terms of increasing local police assets and making Inverell a safer and more vibrant place to live and work,” Mr Marshall said.

“In 2015 the people of Inverell, along with their police officers, said enough is enough and came to me lobbying for a new, larger police station to replace the old building originally built in 1960.

“The station which now stands on Otho Street is the epitome of modern policing. Where before officers had to do battle to find space in old station, built to house only 14 staff, now there is room for 60 officers to space out and conduct their important business.

“Gone are the days of a single makeshift female locker room, insufficient lock-up storage and one interview room, with areas now dedicated to general duties, specialist and tactical officers and highway patrol.

“This facility, though only just commissioned, has already proven its worth by providing a space to house the New England Police Districts new NSW Police Dog unit.

“Over the past 60 years, both the demands on local police and delivery of policing has greatly changed.

“This high-tech 24-hour-police station will give Inverell’s officers the flexibility to adapt to future challenges and the ability to tackle crime head on.”

Mr Marshall recognised all who supported the delivery of the multi-million project, particularly during construction and the constraints forced by the COVID-19 pandemic.

“I sincerely thank all the hard working police officers, who worked out of the temporary station on Campbell Street while the new station was built,” he said.

“In particular I want to recognise Chief Inspector Rowan O’Brien for his input into the design and layout, working to make sure his staff received the best facility possible.

“Whether it’s responding to a marine incident at Copeton Dam, searching for a missing person or just day-today policing the Inverell community should rest easy knowing their officers now have the building and tools at hand to keep them, their families and property safe.”