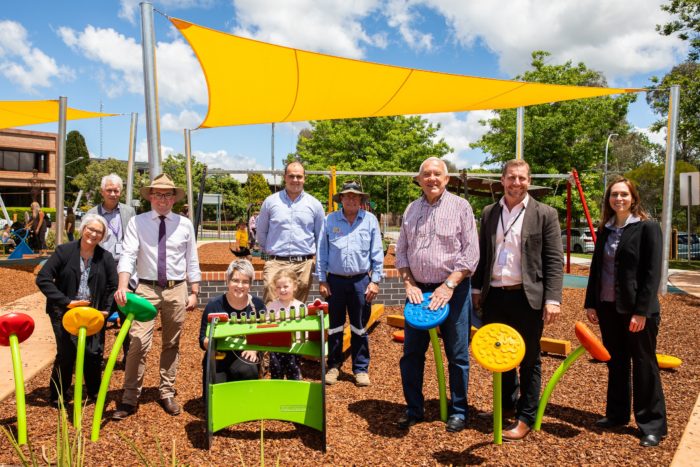 Mr Marshall and Armidale Interim Administrator Viv May jumped on the swings to mark the exciting occasion yesterday.

“For a regional city that boasts being family-friendly, Armidale has lacked a playground of this magnitude, where children can safely come, explore and let their imaginations run wild,” Mr Marshall said.

“Now, residents have this fantastic playground to enjoy, with multi-story climbing gym and slide, flying fox, swings and in ground trampolines.

“A Bushwood Balance Trail and Tropicana Bungalow has also been included. These were two top-ranking items in a community survey inviting residents to identify their preferred additions to the playground.

“The playground is fenced along the road to ensure the safety of children.

“What is so important is that the park has been designed to include equipment suitable for children living with a disability – this means nobody misses out.

“I’m pleased to say the playground has already been given a big tick of approval with a special familiarisation session held last week for students from Sandon Public School and Drummond Memorial Public School.

“I expect this playground will ultimately encourage more people to engage with the Dumaresq Creeklands, a very special part of our city.”

Mr Marshall announced the $1 million State Government grant for the playground in 2018.

Mr May said the sights and sounds of playing children would breathe life into Curtis Park.

“The new playground is a wonderful asset for local and visiting families,” Mr May said

“It will be a tremendous boost for the Dumaresq Creeklands as a heart of community activity and will help elevate the level of activity in the CBD as a whole.

“Its construction was also a valuable injection of activity for local businesses, with Moduplay engaging around a dozen local companies as sub-contractors.

“Adam’s commitment to this project from the outset, and the State Government’s considerable financial input, has been vital for the fantastic playground we now see in Curtis Park.”

Mr Marshall said that in response to community feedback, council would completely enclose the playground, extending the existing fencing on the northern side to ensure the safety of children using the park.