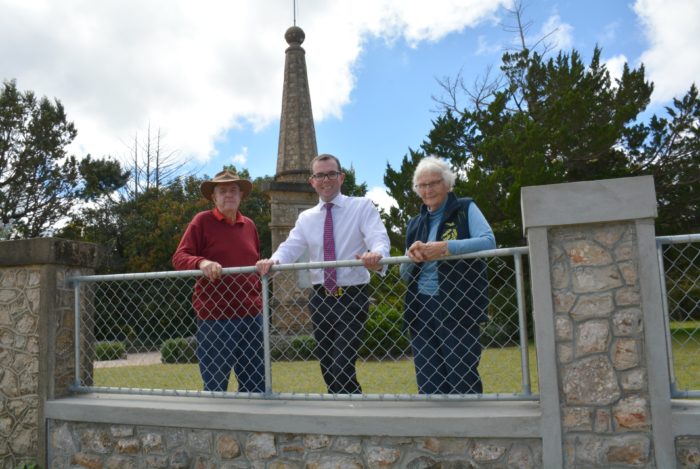 AS ANZAC Day’s dawn fog lifts at the Dangarsleigh War Memorial tomorrow, crowds commemorating the solemn occasion may notice something different about the iconic memorial.

For the first time, the fence surrounding the memorial, near Armidale, is complete – some 80 years since it was started.

Thanks to a $7,524 grant from the NSW Government, local builders finished the work last week.

“I think it will all meld in together eventually and no one will ever know we added to it.”

Northern Tablelands MP Adam Marshall said the Dangarsleigh War Memorial was a poignant reminder of the toll of war.

“The Dangarsleigh War Memorial is one of the few privately constructed war memorials in the state – dedicated to the Perrott family’s loss of their eldest son, Harold, in the First World War,” Mr Marshall said.

“It was built as a promise – and their word was their bond. It’s stood since the 20’s as a sad reminder of how war tears apart families and communities.”

“This upgrade will finish works started in the 1930’s, protecting one of the region’s most recognisable war memorials.”

The works have been completed in time for tomorrow’s dawn service at the memorial, expected to attract more than 300 people.