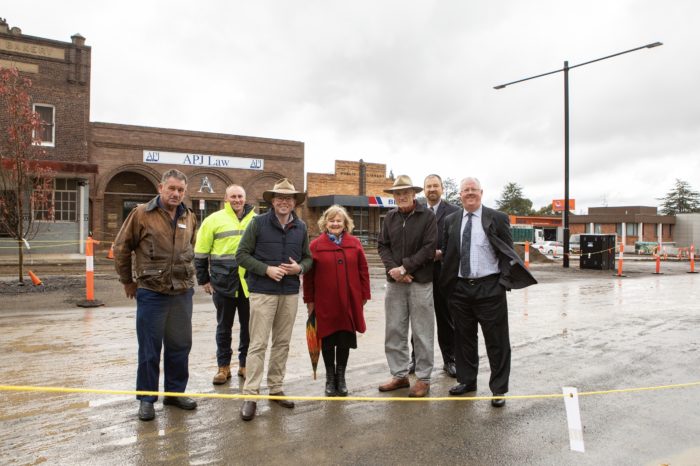 WORK is nearing completion on the upgrade and beautification of a third block of Grey Street, finalising an important facelift and new-look for the Glen Innes CBD.

Mr Marshall said he was excited to see the project nearing completion and Council’s original vision for the CBD taking shape.

“A country town’s main street is its centrepiece and the more open and vibrant it is the more likely tourists and shoppers will stop, visit and spend,” Mr Marshall said.

“In this block, work has already been undertaken to renew underground electricity, water mains and street lighting, with advanced Chanticleer Pear trees planted along Grey Street, between Meade and Ferguson Streets, to match previous stages of the upgrade.

“The project is now in its final stages with the road surface being prepared for asphalting, before the final landscaping work.”

The current upgrades also include a pathway which links Grey Street to the picturesque Central Parklands and sporting fields on East Avenue.

Mr Marshall said this project would improve access to other important areas of the town.

“The SCCF was designed to support projects which bring the community together and improve the lives of those living in them,” Mr Marshall said.

“I particularly love how the Grey Street upgrade connects the picturesque parklands to the CBD, allowing people to go for a walk in their lunch break and experience Glen Innes’ beautiful public spaces.

“I expect once the project is complete the public will see a noticeable increase in the number of visitors calling into town.”

Work is scheduled to be complete by the end of this month.