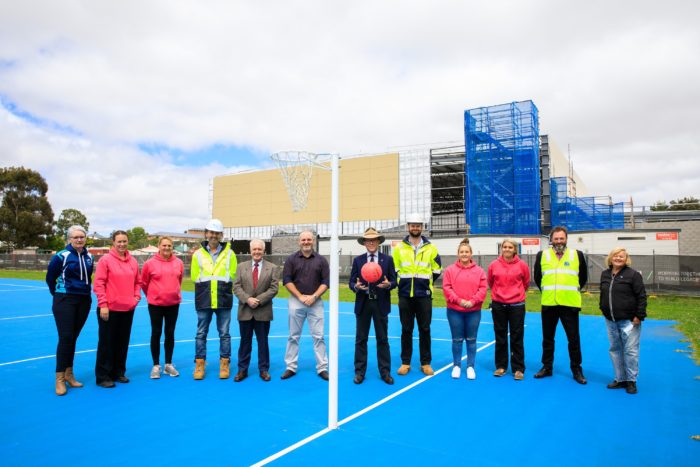 “This next stage will enhance player and community access to what is an outstanding regional sports precinct,” Mr Marshall said.

“In a coming together of codes, two multi-sport courts, with interchangeable boards and rings, will be added at Wilson Park.

“This will allow the local netball and basketball associations to extend their competitions and increase the number of teams able to play.

“Pedestrian connection between, and access to, multiple sport venues will be improved by the construction of concrete pathways and entries.

“Spectator seating for 100 people will be installed in the stadium, giving fans the opportunity to cheer on their team and providing the venue with capacity to host business, community and entertainment events.

“Finally, in an effort to reduce carbon emissions and operating costs at the indoor stadium, a rooftop solar system will be installed.

“As both developments enter their final stages I commend council on its commitment to expanding opportunities for local women to be involved in sport.”

“The growth of women’s sport in Glen Innes has been stifled by the number of courts which meet representational standards or specifications for all-weather play,” Cr Banham said.

“To achieve sports growth, the extra courts are a requirement to host larger scale club and school intrastate/interstate team carnivals and training camps.

“The additional courts will take the town’s count to six netball courts and three basketball courts – that’s massive for shire with a population of 6,000 people.

“The construction of the multipurpose courts, covered areas and a linking pathway through the parklands to the CBD will make access to the facility easier for children and families, opening the space up for a variety of recreational purposes.

“Uneven ground around the sports facilities has inhibited those with a disability and limited mobility from engaging with that area.

“Council is lifting the barriers to accessing sport in our community in the hope of improving health outcomes and boosting social cohesion.”

$76,296 of the overall funding is from the Stronger Country Communities Fund.

“Our goal is to grow as a club and have the ability to offer a safer and more enjoyable space for our members,” Mrs Cooke said.

“We currently have over 100 children attend our venue on a Saturday, either playing netball, watching siblings or waiting for their Mum to finish playing.

“Our current facilities do not provide a safe space for families which is why we will be installing a designated enclosed play area for children.

“Additional storage will give us a place to keep balls and equipment on site, without having to rely on volunteers to bring items to training and game day.

“With so many wash outs last year we are excited about the completion of the indoor stadium and the freedom it will give our members to play netball all-year-round.”