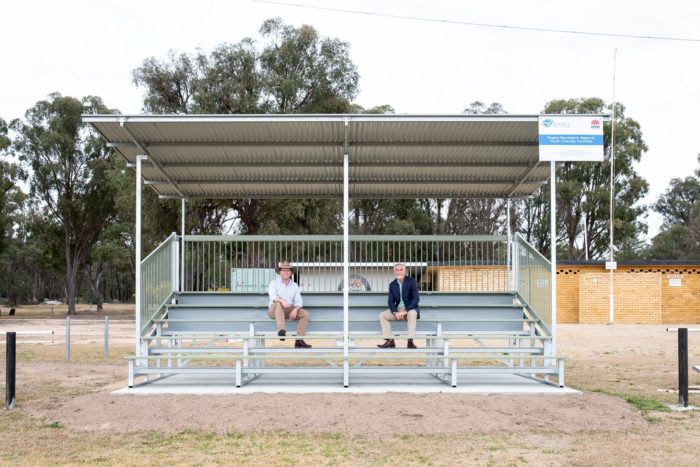 TINGHA residents will be able to fire up the barbecue at Grahame Park before settling in to cheer on the mighty Tingha Tigers rugby league side on the new Recreation Reserve grandstands, with Northern Tablelands MP Adam Marshall and Inverell Shire Council Mayor Paul Harmon last week inspecting the two newly-completed projects.

Mr Marshall said the two additional covered steel grandstands would be a welcomed addition to the rec ground when local footy kicked off again next year.

“With capacity for around 100 spectators, no matter where you sit everyone will have a birds-eye view when the Tigers on the paddock,” Mr Marshall said.

“The grandstands, situated on the half way line, each have five levels of bench seating allowing more spectators than ever to take a load off and enjoy the game.

“Most importantly the grandstands are undercover, with a corrugated iron roof to protect supporters when the rain sets in during winter.

“I want to recognise the work of Inverell Shire Council, which has delivered this $59,500 project in less than six months after the grant was announced.

“All that is left to do now is to install new waste bin enclosures around the ground, which will be covered in individual artworks, designed by young people in the Tingha community.”

Mr Marshall said the new barbecue and picnic areas would enhance the many public events which are held at Grahame Park.

“Whether its NAIDOC Week celebrations or a community health day hosted by Armajun Aboriginal Health Service, Grahame Park is the gathering place of choice for the Tingha community,” Mr Marshall said.

“With its new robust, twin plate electric start barbecue and undercover picnic area Grahame Park will continue to be the centre of social life in Tingha.

“The facility makes Grahame Park the perfect place for a family birthday party and will no doubt encourage more locals to get down and enjoy the picturesque Copes Creek.

“Grahame Park is also recognised by the Rural Fire Service as a Neighbourhood Safer Place in times of bushfire, and so this additional undercover seating will provide added protection for residents from the weather, should they ever have to evacuate to that site.”