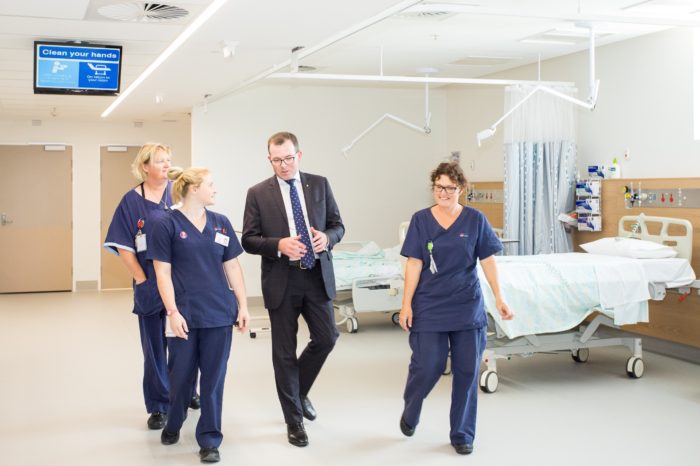 Mr Marshall said both units, located on floors one and two in the West Wing of the existing hospital, were receiving patients from today.

“The new units look amazing and are more spacious, better designed for staff and can cater for more patients than the old clapped out areas they have replaced,” Mr Marshall said.

“This is a wonderful culmination of work which started in March 2015, when funding for this critical redevelopment was announced.

“These two fresh units link in directly to the new four-storey building on their corresponding floors, ensuring the redeveloped areas are physically linked in with the new build, benefiting patients and staff.”

Mr Marshall met with nursing staff during the tour, who he said were excited about working in new purpose-designed spaces.

“The staff are really excited about the new units, especially those who have been at the hospital for many years and had to work long hours in the old, cramped spaces,” he said.

Mr Marshall said that with the ICU and Day Surgery units completed, there was only one more job to do before the full redevelopment of the Armidale Hospital was completed.

“Now the attention turns to the old emergency department, which will be transformed into a new mortuary in one half and the other will be the new home for the improved physio department,” Mr Marshall said.

“While it seems as though Armidale Hospital has been a construction site for years now, the project which includes the construction of a new four-level hospital building as well as major refurbishments and landscaping, has run pretty much on schedule.

“It is a terrific testament to the professionalism and hard work by all the staff involved and we have a wonderful facility I think we should all be very proud of.

“I was thrilled to take the final tour of the last refurbished sections today and look forward to a grand official opening early next year.”