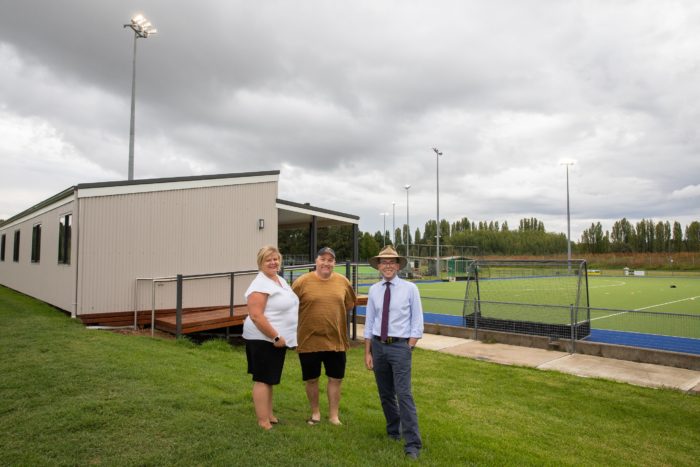 THE spotlight on Hockey New England is now shining brighter than ever, according to Northern Tablelands MP Adam Marshall, who last week joined President Lisa Whitty to switch on and inspect the completed installation of new LED lighting at the club’s turf fields at Armidale’s SportUNE.

“With the flick of a switch Hockey New England has a bright glowing future ahead of it,” Mr Marshall said.

“This funding has allowed Hockey New England to replace the old and expensive halogen lights with new state-of-the-art LEDs, capable putting out 500 Lux, or the recommended light needed for professional televised sport.

“Hockey can now be played safely any time of day at SportUNE, with these lights allowing officials to schedule training and matches well into the evening, ensuring every one of the 1,000 members gets a fair chance to participate.

“I want to recognise the hard work of the Hockey New England committee, who had to negotiate COVID-19 restrictions to ship the specialised LED bulbs from the Netherlands.

Mr Marshall said the lights would be put to good use in May, when Armidale would play host to the under 15 years NSW State Hockey Titles.

“I look forward to these lights illuminating the outstanding sports facilities on offer in our city and impressing all the visiting players and officials,” Mr Marshall said.

Hockey New England President Lisa Whitty said the association was extremely proud of the work that was put in to secure the grant and install the new lighting.

“Already we are hearing positive feedback from players who are all extremely happy with the increased visibility from the new lights,” Ms Whitty said.

“Alongside the safety benefits of being able to see the ball clearly in low light these LED bulbs will be cheaper to run, which means more money for our organisation to reinvest into further improving our facilities and player development.

“We are especially grateful to Adam and the NSW Government for their grant funding to our small local association.

“We believe that the lighting upgrade is a positive step forward in our overall plan for improving the Hockey New England Hockey Centre.”