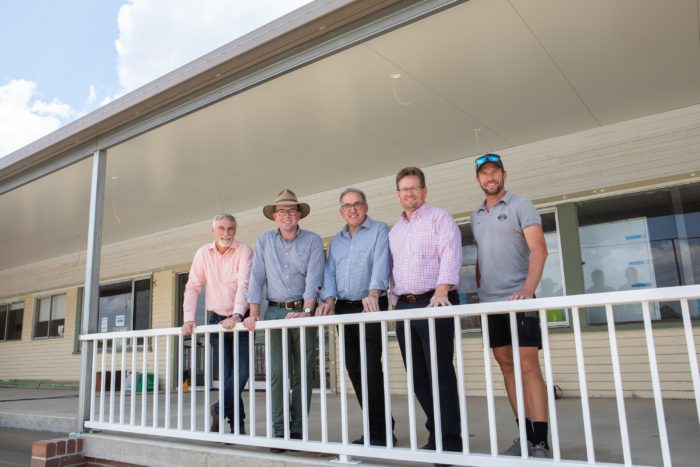 THE world’s best tennis players will soon feel quite at home at the Inverell Tennis Club ahead with work on the $235,964 upgrade of the clubhouse on track to be finished by March this year.

“Members of Inverell Tennis Club will soon have the clubhouse they deserve with construction of the new veranda, pergola, kitchen, near and serving areas and wheelchair access now complete or in progress,” Mr Marshall said.

“The overhaul of the clubhouse really is the icing on the cake for a facility which already boasts six synthetic and 15 clay courts, making it one of the premier tennis centres in the region.

“A fresh lick of paint on has really freshened up the outside of the weatherboard building and compliments the new veranda and pergola which give spectators the perfect viewing platform of watch the main courts.

“Work has now turned to the kitchen area with installation underway on a modern food preparation and serving area, able to cater for large numbers during busy competition and tournament periods.

“I’m pleased to see a local building contractor undertaking these works and I want to congratulate Dan Wilks and his team for the professional and high quality job they have done.”

Mr Marshall said the project was expected to be finished and ready to be opened in March, just in time for the first round of the NSW Tennis North West Junior Development Series (JDS).

“This year close to 100 of the region’s up and coming junior tennis players will land in Inverell to compete in the JDS event, many of whom will stay in Inverell overnight injecting important dollars into the visitor economy,” he said.

“This will be the perfect opportunity to show off the potential the new clubhouse has to offer and spread the word about the quality facility’s now in Inverell.

“In the long term this upgrade will support Inverell Tennis Club’s efforts to grow its membership and also attract additional major tennis tournaments to town.”