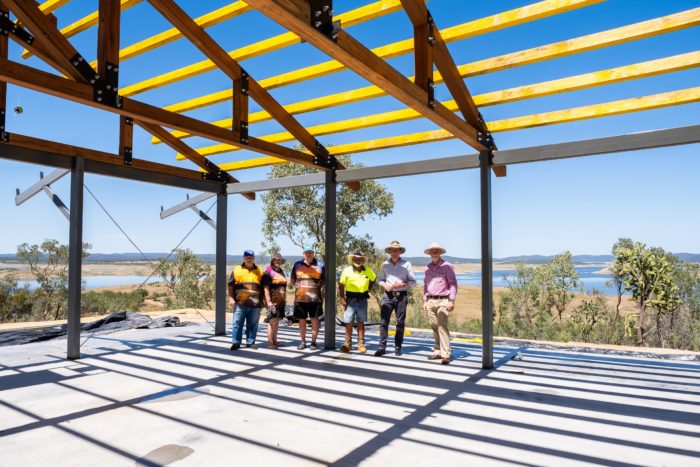 CAMPERS spending this Christmas on the Northern Foreshore of Copeton Dam will be among the first to experience the new viewing platforms, footpaths and amenities block, as work roars ahead on the $5.7 million tourism development.

“In the space of 12 months Northern Foreshores Copeton Dam has transformed from a comfortable camping getaway to a luxury outdoor escape,” Mr Marshall said.

“The new amenities block, which is twice the size of the original, is equipped with showers, toilets and disabled access and is now ready for visitors to enjoy.

“In terms of recreational infrastructure, 2.4 kilometres of shared footpaths now snake their way around the park, connecting the camp ground to a number of new viewing platforms that overlook the dam.

“This week, the floating pontoon was installed beside the concrete boat ramp, enabling boaters to safely enter and exit boats from the water’s edge.

“The new Uniplan caretaker’s residence and kiosk looks fantastic and acts as a professional welcome mat as people drive through the front gate on the recently re-sealed road.

“As this a family venue traffic calming devices have been installed to ease the speed of vehicles around the park.”

Mr Marshall said over the next two months the final stages of the redevelopment would be completed.

“Progress on the communal hall is going well, with the frame for the 100-person venue taking shape,” he said.

“Children will be excited to know the next cab off the rank is the splash-pool, which will provide relief from Inverell’s notoriously hot summers.

“The new playground is still cordoned off, but once soft-fall is put down it to will be open.

“Every stage of this project has been designed to allow access for all, and I seriously think the tourism opportunities it presents will inject millions into the economy each year, helping it to rebuild after years of drought and the pandemic.”

Mayor Paul Harmon said the popular camping area was now officially back open to the public.

“Over the pandemic, the Northern Foreshore has been closed, allowing the myriad contractors uninterrupted access to the various building sites,” Cr Harmon said.

“This project has been a huge employer for the Inverell area, with between 50 and 55 people each day working on the different elements.

“Caretaker Tom is now taking bookings and Inverell is really looking forward to welcoming the return of visitors and economic benefit that they will deliver to local hospitality and retail operators.”