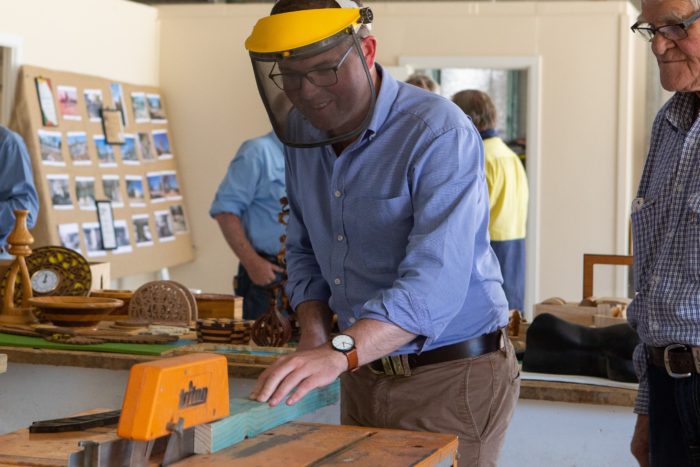 Northern Tablelands MP Adam Marshall had the honour of cutting the first piece of wood in the new Moree Men’s Shed on Friday.

Mr Marshall announced a State Government grant of $163,233 last year to construct the new Ranbuild shed at the Moree Showground, giving the men’s group a permanent home to call their own.

In the space of only a few months the organisation has gone from working in a small, old and flood prone space to the ‘Taj Mahal’ of tool sheds at the showground, Mr Marshall said.

“This huge modern shed is now the envy of every tradie and farmer in the Moree district,” Mr Marshall said.

“I am so pleased to see this building finished and around triple the size of the old, leaky and flood-prone site on the northern side of the showground.

“Equipped with a concrete floor and two large roller doors it is partitioned into individual sections to allow for wood working, metal fabrication and most importantly, smoko!

“With the majority of Men’s Shed members being retirees it was important to make this new building comfortable and it’s great to see air conditioning has been installed meaning work can take place all year round.”

An overwhelmed Moree Men’s Shed President Peter Sampson said after years of uncertainty the group now had a permanent home.

“This facility is bigger and better than any of us could have imagined and I thank Adam for all he has done to put a roof over our heads,” Mr Sampson said.

“While our old shed served us well it wasn’t practical for an organisation which has lots of elderly members with a lack of toilet facilities and no heating and cooling.

“None of that is an issue now and I expect as word gets out we will start to see more and more blokes sticking their head through the door and asking if they can get involved.”

“Like any major infrastructure project there are always some unexpected loose ends,” he said.

“This grant will ensure the Men’s Shed doesn’t have to fork out any more of its own money for things like council fees meaning more money in the bank to buy more tools and toys.

“I really want to congratulate Peter and his colleagues, in particular Col Murray, who have worked to get the shed to this stage and I look forward to dropping by in the future for a cuppa and seeing the great work which is produced.”