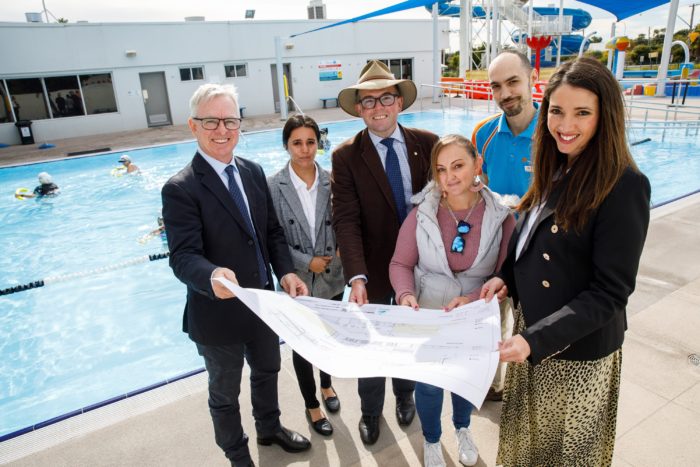 Last year council received a $999,358 grant for the construction of a new clubhouse and amenities at the popular recreation facility. The total cost of the redevelopment is $16.3 million.

Mr Marshall said the redevelopment, which includes building a new 50 metre Olympic pool, would reinvigorate one of the town’s leading visitor attractions.

“Moree has been without a 50 metre Olympic pool since mid-2021, with the former pool controversially removed due to a catastrophic structural failure,” Mr Marshall said.

“Today’s funding is the very best of news for Moree – it means the community, after a long wait, will now get its 50 metre public pool back.

“The hole in the ground eyesore, where the pool once sat, will be removed and replaced with a modern new pool, negating the need for parents to take their children to Warialda or Bingara to swim and allowing a full range to aquatic activities to return.

“This is so exciting and I’m thrilled for the Moree community.”

Mr Marshall praised Mayor Mark Johnson and councillors, who had ‘hit the ground running’ after last December’s election, establishing a comprehensive and staged plan to redevelop the MAAC in a way which would reinstate the facility to its full operating capacity and will encourage patrons back to the water.

“The redevelopment includes a new 50 metre pool, grandstand and clubhouse. A refurbished heating plant and chemical storage shed will be constructed,” he said.

“The two existing hot pools, program pool and wellness pool will be upgraded, along with the kiosk building, wellness centre and gym improvements.

“MAAC not only provides health benefits to the local community, but it is also a linchpin for Moree’s visitor economy.

“During normal operations the centre has attracted more than 200,000 visits from locals, domestic and international travellers annually. I’m sure the town’s business sector will welcome the financial benefits resulting from the full resumption of visitors to the MAAC’s healing waters.”

Moree Plains Shire Mayor Mark Johnson said with the latest grant money secured council hoped the project would go out to tender in August, after councillors approve the project in full at council’s July meeting.

“The lack of a swimming pool has acted as a significant barrier to swimming participation across the Shire, reducing health benefits, water safety skills and tourism opportunities,” Cr Johnson said.

“Over the next 18 months council will turn those outcomes around, by undertaking this comprehensive upgrade of the MAAC.

“Council expects to start construction at the end of the summer swimming season next February. The build will take the best part of a year with the opening slated for Christmas 2023.

“Council would like to thank Adam and the State Government for their ongoing support of the MAAC redevelopment and Moree.”