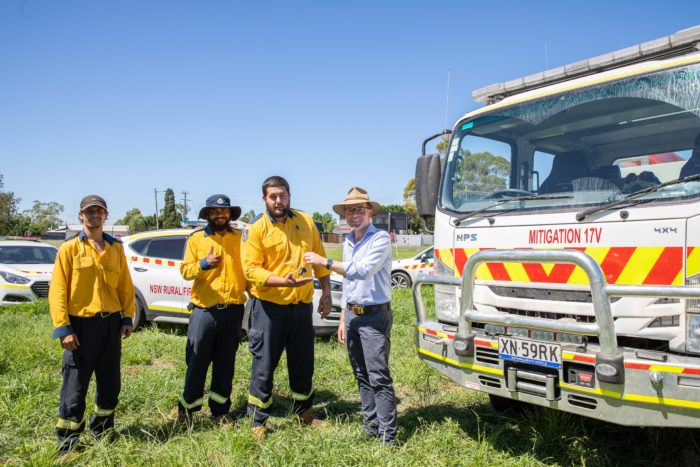 Mr Marshall said the four-person team was one of three announced for the North Western Area Command last year.

“Since the allocation of the new FMTs last September, there has been an 125 per cent increase in the number of RFS personnel employed to undertake hazard reduction works locally,” Mr Marshall said.

“Projects, like those currently underway to clear 578 metres of vegetation between the Mehi River and Mehi River Caravan Park, are vital in limiting the risk of future fires.

“In three months over 13 different hazard reduction projects have been undertaken by local FMTs, including the establishment of a protection zone at Bingara tip and hazard reduction control lines at Warialda Rail.

“The FMTs have also been out in the community assisting the elderly, infirmed and disabled with bushfire preparation around their homes.

“The State Government is committed to increasing its annual fire hazard reduction program and this FMT has been a very welcome boost to our region’s firefighting capability.”

Mr Marshall said having a unit of locals from Moree’s Aboriginal community was proving beneficial in building relationships between emergency services and Aboriginal residents.

“You can’t beat local knowledge which is exactly what Toby Key, Dylan Craigie-Duke and Lachlan McGrady bring to their roles,” he said.

“The Moree FMT is proactively working with a number or Aboriginal communities to identify and remove fire hazards and improve their overall bushfire preparedness.

“Next week the Moree team, Tamworth machinery team and Aboriginal crews from Brewarinna and Bourke, will be heading to Toomelah where they will construct and create an asset protection zone around the community.

“Due to its isolated location on the NSW/Queensland border, the Namoi Gwydir District has been working to establish a comprehensive hazard reduction plan to keep its residents safe.

“Heavy plant and an operator will also assist to protect this community from future fires.

“I’m pleased to see the RFS proactively engaging with Aboriginal communities and look forward to seeing works scheduled for other localities later this year.”

The 10 new full-time paid positions have been funded as part of a $10.7 million State Government campaign to increase the amount of hazard reduction across the region.