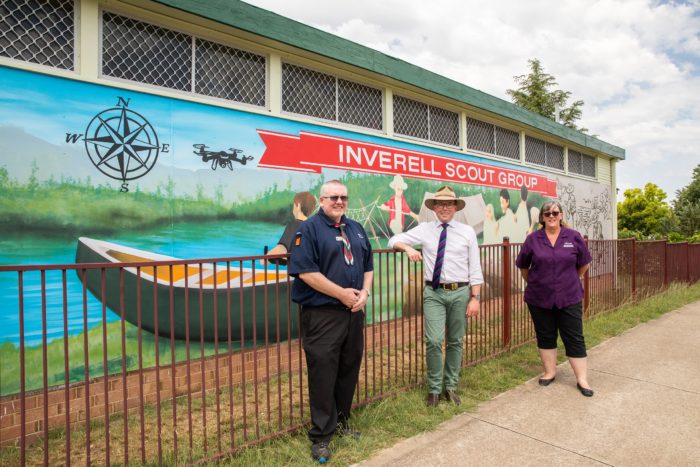 Mr Marshall said the mural was a bright light for members of the Inverell Scouts, in a year when their programs had been greatly impacted by the pandemic.

“This mural, painted by local Gilgai artist Ken Brindley, pays tribute to the great work NSW Scouts does in encouraging young people to get outdoors and be active,” Mr Marshall said.

“Funded as part of a $1 million State-wide COVID stimulus program, the mural depicts the local Scout members camping, canoeing and generally engaging with the great outdoors.

“Also, this grant has repainted the rest of the outside of the hall and installed new high visibility signage along the road, outside of the building.

“The Inverell Scout Hall is an important part of that community, servicing around 30 youth members and four adult leaders, as well as acting as a venue for other community organisations to hold gatherings.

“These works have made the hall really stand out and given local Scouts a base to be proud of as well.

“Scouts NSW is one of our State’s largest and most successful youth organisations building leadership skills, resilience and friendship while offering an extraordinary variety of activities for young people, so it’s fantastic to help secure their future.”

This stimulus will help Scouts NSW bounce back from a difficult period while also providing a boost for tradies and material suppliers.

In May, Mr Marshall announced a $19,745 grant to install a new kitchen in the building, taking the total amount of State Government funding for Inverell Scout Hall in 2020 to $55,597.