NEW ONLINE FUEL PRICE BOARD TO GIVE COUNTRY MOTORISTS THE EDGE 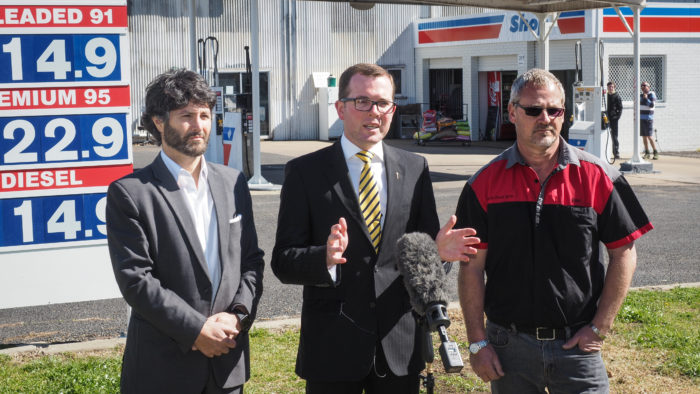 NORTHERN Tablelands MP Adam Marshall today welcomed the introduction of legislation in State Parliament this week which will require all service station operators across NSW to report their fuel prices in real time on a new online fuel price board.

Mr Marshall said the online fuel price board would make it easier for motorists to compare fuel prices at different service stations, allowing them to make decisions that will help save them dollars at the bowser.

“This legislation will create a greater level of transparency around fuel pricing, which is what I and the community in our region has been calling for,” Mr Marshall said.

“For the past few years we’ve had an ongoing issue with fuel prices in Armidale and while the ACCC in the midst of another investigation, this new online price board will certainly help.

“Our major concern in Armidale is the perception of collusion between the retailers which left consumers reeling with the higher prices they were paying compared to neighbouring communities.

Mr Marshall said fuel retailers already had to display the price of their fuel on signage boards which can be easily seen as motorist approaches the service station.

“Operators will now be required to post those prices immediately online on a new website, allowing the consumer to make an informed decision before they head off as to where to fill up,” he said.

“There will be no fee for the service station operator to register to use the database or to upload data, however, there will be severe penalties for selling fuel at a price other than that notified on the online price board.

“It is anticipated that apps will be developed by third parties which will enhance the consumers experience of the information available, for example by combining price data with a maps, which has be easily access over smartphones and tablet devices.

“I’m pleased to say that social media played an important role recently in bringing our Armidale fuel retailers to heel and I thank everyone for their role in that campaign.”

Mr Marshall said the system proposed in the Bill would allow for information to be shared within a very short period of time.

“When there is a price change at the bowser, it will also be recorded via the online portal,” he said.

“It is a simple change but one that will provide motorists with reliable information that captures the entire market – from big players like BP and Caltex to the corner store petrol station.

“Motorists want to know where they can get the best deal on fuel.

“Service station operators want to reach customers and potential customers with current fuel price information and in the internet age this information has to be available online so it can be equally accessible to everyone in the market at the same time.

“This is a win/win situation for everyone and I’m looking forward to speaking on this bill in the parliament next week and giving it my full support.”