NEW POLICE STATION FOR INVERELL FIRMLY ON THE DRAWING BOARD 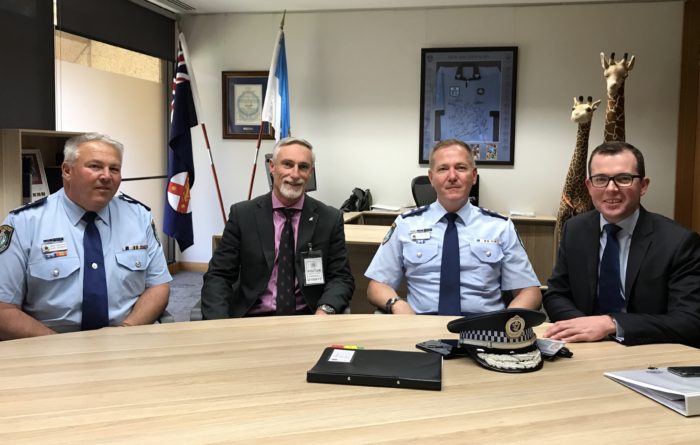 He said the Minister had seen firsthand the urgent need for a new station when he visited Inverell last year and was firmly committed to the project.

“It was the most positive meeting I’ve ever been involved in about the new station in Inverell,” Mr Marshall said.

“We not only secured unanimous agreement for the new station in Inverell and for it to be delivered as quickly as possible, but also an immediate injection of more than $250,000 to undertake work to address some urgent problems that cannot wait.

“The meeting was the first time the Mayor and I have been able to put our case direct to the new NSW Police senior leadership team and I was delighted with the response.

Given the number of new stations and other major capital works projects NSW Police is already committed to delivering from the last election, Mr Marshall said that realistically, the community was not going to see a new station in Inverell for at least another 12 months.

“It’s not fair on our local police to ask them to work for another 12-18 months in a cramped and inadequate station while our new station is being planned, so I am delighted with the immediate injection of funds to address safety and operational issues within the station right now,” Mr Marshall said.

“Work for the new station will continue in earnest, but this funding will fix the severe building problems now, which have been identified by our local police and confirmed by NSW Police Properties when they inspected the station earlier this year

“This is by no means a long-term solution, but it will be a massive improvement on the current conditions, as an interim measure, until the new station is constructed.

“In no way does this diminish the case for the new station nor the urgency of it and I am determined to ensuring the Inverell community gets the new police station it deserves.

“Our local police serve our community with distinction and they deserve the very best in equipment and facilities and that’s just what I am committed to delivering for them.”