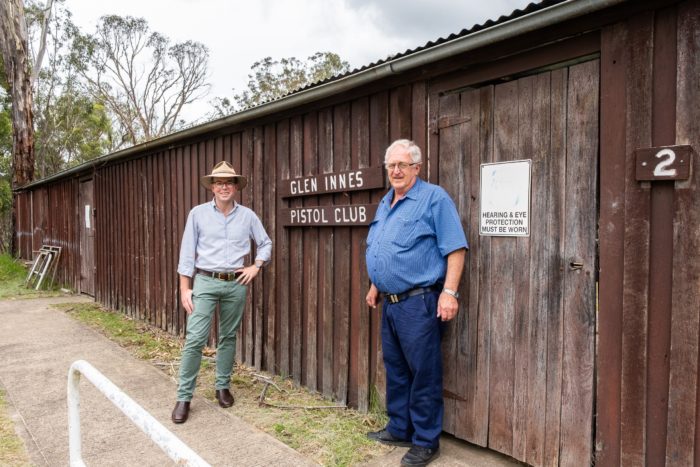 THE Glen Innes Pistol Club has this week nailed one of its long-term priority projects, with Northern Tablelands MP Adam Marshall announcing an $85,873 State Government grant to demolish the almost half-a-century old range building and construct a new modern facility in its place.

Mr Marshall said 46 years ago club members came together and used their skills to build the range structure from local second hand materials.

“While the existing range building has stood the test of time, there is need to bring the facility up to modern shooting standards and address some emerging structural issues,” Mr Marshall said.

“The building, which covers the shooting bays on the club’s two 25-metre ranges, is suffering the effects of termites and exposure to the weather.

“It will be replaced with a modern steel framed structure with a concrete floor and wall cladding, while a new colorbond roof will address serious leaks which have developed

“Over the past 12 years the club has embarked on a program to modernise range facilities and replacing this building will bring both 25 metre ranges up to national standards, while saving the club money through reduced maintenance costs.

“This is brilliant news for the club and will ensure it can continue to attract shooters from across the country to Glen Innes for major competition events.”

Glen Innes Pistol Club Treasurer Wayne Unicomb said construction of the new building had been a long-term goal of the committee.

“Since the upgrade to our air range was completed in September 2019, achieving a new range building has been our top priority,” Mr Unicomb said.

“Our ultimate aim is to have a shooting complex which meets all Australian sanctioned requirements.

“This means all scores recorded at our Open events can be certified by the national referee present and used toward state and national team selection scores for Olympic and Commonwealth Games matches.

“This will be the second of three range buildings at the complex which will meet those standards.

“We are hopeful plans for the build can be drawn up and approved by mid-March, with demolition, site preparation and construction taking place in April ahead of the final fit out with seats and firing point dividers.

“Our Open Events have enjoyed almost 40 per cent growth in visiting competitor numbers over the past 15 years and as we improve facilities further we would expect this growth to continue.”