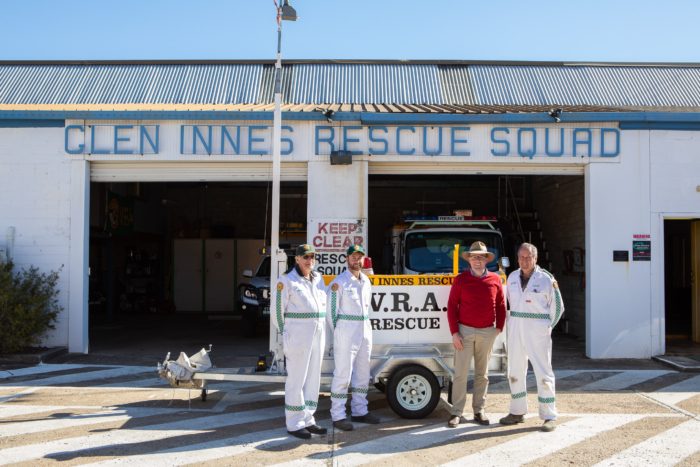 RESPONDING to major emergencies in the dark is no longer a problem for the Glen Innes Volunteer Rescue Association Unit (VRA), with the organisation flicking the switch on a new light trailer, built by its members.

Last year Member for Northern Tablelands Adam Marshall provided a grant of $10,000 to the Glen Innes VRA unit so it could purchase fittings, lights and the engine needed to construct a light trailer.

Mr Marshall said the donation was a small price to pay to help local emergency services save lives.

“During a serious motor vehicle accident, search for a missing person or bushfire every second counts and this trailer now gives the VRA the extra light it needs to continue its important work well after the sun goes down,” Mr Marshall said.

“Glen Innes VRA members, under the leadership of Captain Mike Brewer, have made every dollar granted and donated to them count, purchasing a box trailer to mount and transport the large lights and doing the full fit out themselves.

“The unit services one of the largest catchments in NSW, ranging from about 105 kilometres towards Grafton, up to Deepwater, and halfway to Guyra and Inverell so I’m sure this new light trailer will get plenty of use.”

VRA Captain Mike Brewer said the light trailer had already made a major difference to the squad’s ability to respond to major incidents at night.

“Up until now our unit has had no capacity to light up crime scenes and major incidents after dark,” Mr Brewer said.

“In only a month we have used the light trailer at three separate motor vehicle incidents, giving our volunteers better visibility during rescues and clean ups, making them more quick and efficient in their work.

“The best thing about this trailer is it has value to more than just Glen Innes VRA. It will be available to the units at Guyra and Inverell and can be utilised by other emergency services like NSW Police and the Rural Fire Service.”

“For 18 years Mike has been leading the Glen Innes squad, ensuring it has the most up to date equipment and serviceable vehicles and is ready to provide support during any event,” Mr Marshall said.

“I want to thank Mike for his dedication and service to the community and wish him luck Awards Presentation Dinner at the Bankstown,” he said.