NEW ROOF ON THE WAY FOR EMMAVILLE’S WAR MEMORIAL HALL 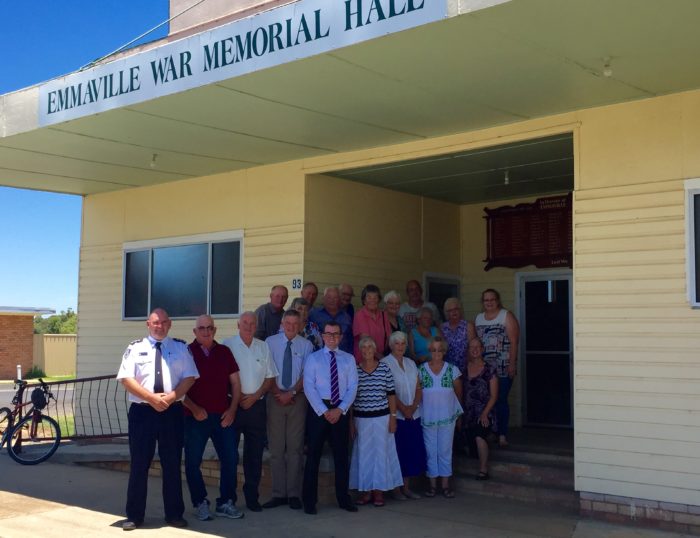 Northern Tablelands MP Adam Marshall recently met with members of the Emmaville community to announce funding for the replacement of their hall roof.

THE Emmaville War Memorial Hall’s ageing hail-damaged and leaking roof will soon be replaced, thanks to $28,269 in funding from the state government, announced today by Northern Tablelands MP Adam Marshall.

Mr Marshall visited the hall late last week with Glen Innes Severn Mayor Col Price to meet with the hard-working hall committee and give them the good news. He said the hall was an important focal point for the Emmaville community which was well used by a range of local organisations.

“The hall is very well used by several groups and has also been earmarked by the NSW Rural Fire Service (RFS) as the Neighbourhood Safer Place, a gathering point for all locals in case of an emergency,” Mr Marshall said.

“The roof was seriously damaged a few years ago in a hail storm and unfortunately the insurance only allowed the community to partially replace the roof. It’s now leaking quite a bit and the paint work is peeling, making it unsafe to drink the water collected it its tank.

“As the hall has been identified by emergency services as the safest place to be in an emergency, the community needs to be confident the water is safe to drink and that any equipment stored in the hall won’t be damaged.

“The floor is beginning to show signs of water damage so I was very happy to support this application and delighted we’ve secured enough funding, through both programs, to replace the entire roof.”

Emmaville Memorial Hall Committee President Clark Say said the funding was very welcome as the state of the roof had become a serious issue for the community.

“The lead paint on the roof is slowly peeling off and therefore no longer safe to drink the tank water; the hall has many user groups and it’s reasonable for them to expect to be able to use the water at the hall,” Mr Say said.

“Something needed to be done and we’re very grateful to get this financial support from the government and thank Adam for helping us secure it.”

Funding for the hall roof replacement was secured from the Community Building partnership Fund ($15,769) and the NSW RFS ($12,500).

The upgrade of Moree Artesian Aquatic Centre (MAAC) will kick ahead with thanks to a $999,358 State government grant,... Read More