NEW SHARED PATHWAY TO GET PEOPLE MOVING IN INVERELL 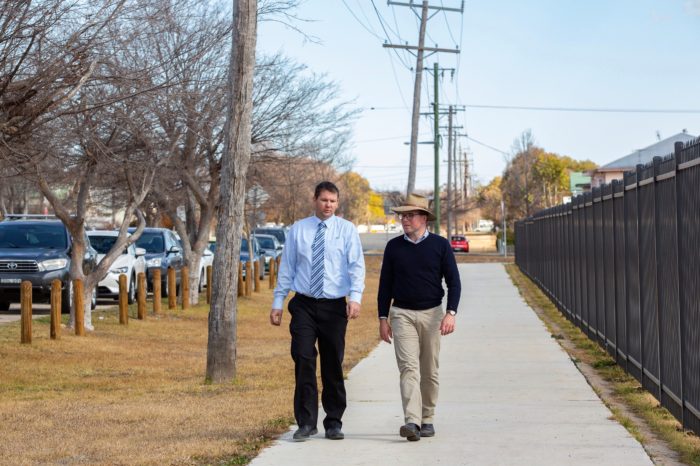 Northern Tablelands MP Adam Marshall, right, with Inverell Shire Council’s Manager Civil Engineering Justin Pay on the shared pathway near Inverell Public School which is about to be extended.

CYCLING and walking the sites of Inverell is becoming a whole lot easier with work to extend the town’s extensive shared pathway network thanks to an $81,847 State Government grant, announced today by Northern Tablelands MP Adam Marshall.

The funding will be matched dollar-for-dollar by Inverell Shire Council and will see $163,694 spent on constructing the new path along Arthur Street.

“A decade ago Inverell had few to no paths around town, but now you can walk, run or ride almost anywhere around town without leaving the concrete,” Mr Marshall said.

“Currently the town-wide cycleway is 16 kilometres in length and connects Inverell’s CBD to its park and river lands, schools and sporting fields.

“Over the next month council will continue its extension of the path from Ross Street at Inverell Public School around the corner onto Arthur Street, with a further 210 metres being added.

“It’s great to see Inverell Shire Council proactively trying to make it easier for residents to pop down to the local shops without jumping in the car, the smooth pathways in particular beneficial for those living with a disability and the elderly.”

Mr Marshall added footpaths were important tool in improving the health of a community.

“People’s lives are just getting busier but these flat, easy to access footpaths mean residents can pull on their joggers any time of day or night and set off without fear of injury or having to run on the road with traffic,” he said.

“The Active Transport Program was established so the NSW Government could work with councils to make walking and cycling around communities more convenient and safer – Inverell is doing a fantastic job embracing that.

“Inverell’s town-wide Bike Plan already connects Lake Inverell on the eastern side of town with Inverell High School in the north and I look forward to council now linking up these sites to its residential areas.”

The new shared pathway is expected to be complete by the end of the year.