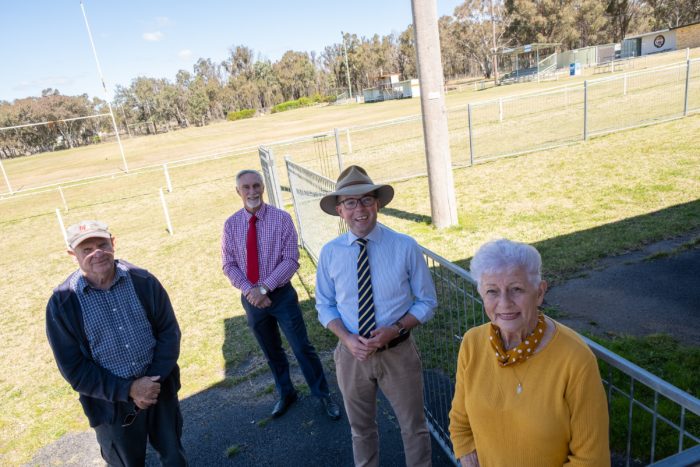 A COMMUNITY effort to have Tingha Recreation Reserve listed as the village’s designated emergency evacuation centre is one step closer to reality, with Northern Tablelands MP Adam Marshall last week inspecting new solar lights and women’s shower at the facility.

“During the devastating Tingha Plateau bushfires of February 2019, the recreation reserve was used as an evacuation point, a distribution area for relief efforts and a refuelling station for NSW Rural Fire Service volunteers,” Mr Marshall said.

“To boost the ground’s capabilities in the event of future disasters, $55,347 in bushfire recovery funding has been spent installing five, six-metre high solar lights throughout the grounds to improve safety.

“The lights have the added bonus of improving security, after-hours by illuminating the car park area for club patrons.

“Also, new female showers have been installed in the public amenities at the Tingha Sports Club.

“The need for additional showers was borne from the lack of facilities during the bushfires to service female emergency service volunteers and community.

“This November, Inverell Shire Council expects Tingha Recreation Reserve will be formally declared an Evacuation Centre, with this project assisting to ensure the site is equipped to meet community needs during a period of emergency.”

“This is not only a major win for the reserve’s Land Managers, but many patrons of the Tingha Sport and Recreation Club,” Mrs Graham said.

“It has been a long awaited and a very welcomed project and we thank Adam and Inverell Shire Council for their support.’”

Inverell Shire Mayor Paul Harmon said the Tingha Recreation Reserve was run by a hardworking team of volunteers and Council is delighted to see this project complete.

“The reserve was a vital hub for the community and emergency services during the Tingha Plateau bushfires and we thank Adam for his support.”