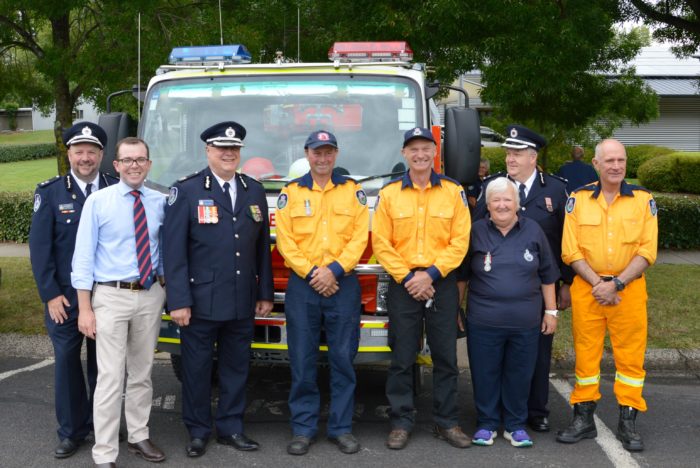 MEMBERS of the busy and active Glen Elgin NSW Rural Fire Service (RFS) Brigade, near Glen Innes, had a lot to celebrate recently, with the presentation of long service medals to two of its volunteer members and being handed the keys to its new fire tanker.

Northern Tablelands MP Adam Marshall was on hand to present brigade captain James Gresham with the keys to the new $180,000 category 7 tanker (CAT 7), which replaces the outdated 20-year-old vehicle.

“This new truck will be a priceless resource for the brigade, providing the latest and best equipment to keep our RFS volunteers safe on the fire ground and help them do their job as best they can,” Mr Marshall said.

“James Gresham and his brigade of 15 members has provided magnificent service, responding to grass fires across the district and also attending motor vehicle accidents on the New England Highway and on behalf of the community I thank them for their service and dedication.

“The government and community owes the brigade its full support and the best equipment we can provide.”

“I congratulate Ben and Norma on receiving their medals and thank them, for their service to our community and to the RFS,” Mr Marshall said.

Dundee RFS captain Garry Parker was also awarded with his second clasp to the long service medal for 31 years with the brigade.