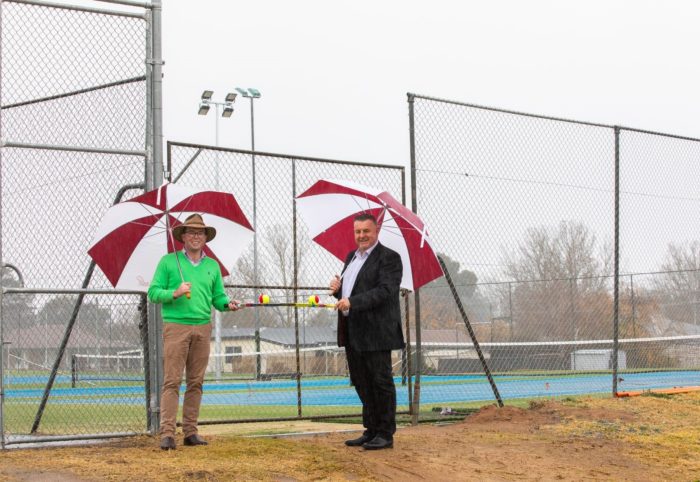 The new synthetic grass surface is down, the lights are up and now all that’s needed are local players, with Northern Tablelands MP Adam Marshall and Uralla Shire Mayor Mick Pearce recently inspecting the completed $198,582 upgrade of Uralla’s tennis courts.

Mr Marshall said walking out on Uralla’s new blue courts, you could be excused for thinking you were about to play the U.S. Open.

“The blue courts with green border are synonymous with the American grand-slam, and now Uralla has four of its own ready for local players and aspiring professionals,” Mr Marshall said.

“The blue synthetic surface has become a favourite for many clubs as it provides better ball visibility for players and spectators.

“Prior to the upgrade the old courts, in particular the two far back ones, were compared to a ‘goat track’ and posed a serious injury risk to players.

“That problem is no longer with the new courts ideal for coaching junior players and seasoned hitters looking to slog it out.”

“In the past, having only four courts of playable standard has really restricted the ability for the club to host large competitions or regional tournaments,” he said.

“Having six courts, all under lights, means the club is now equipped to cater for its 100 members, with matches able to be played both day and night.

“Tennis has resumed in Uralla following the easing of COVID-19 restrictions, with a number of keen locals braving the frosty nights to participate in the fast-four competition on Tuesdays and adult social tennis on a Wednesday.

“What is immediately striking about the new courts is how professional they make the entire Uralla Sporting Complex look and I congratulate the club’s committee and Uralla Shire Council for delivering the community such a high quality facility.”